When Hirwani Bowled Himself Into the Record Books

When the West Indies visited India in 1987-88 they were still very much the No 1 side in the world. In the midst of their all-conquering run from 1980 to 1995 during which they did not lose a Test series anywhere they were expected to have it easy in India having won the previous series played in this country four years before by a comfortable margin. Also the Indians could not have been in a confident frame of mind having lost the last series played at home to Pakistan earlier in the year. And in 1984-85 India had lost to England also at home.

At that time the home record was not as impressive as it became in subsequent years and India not unexpectedly lost the first Test at New Delhi in four days by five wickets. On the way they were shot out for 75 the lowest Test total in this country. The home side were also fortunate to get away with a draw in the second Test at Bombay with rain cutting short play by over ten hours. The third Test at Calcutta was a high scoring draw and so despite West Indies being the better team India still had a chance to level the series if they could win the fourth and final Test at Madras.

The Indians suffered a major blow when Dilip Vengsarkar the captain and the batsman in the form of his life was injured after scoring 102 at Calcutta. Ravi Shastri was called upon to lead the team for the first time in a Test and he was given three newcomers in WV Raman, Ajay Sharma and Narendra Hirwani.

The selection of the last named player attracted a lot of attention. Hirwani was a 19-year-old orthodox leg spinner from Madhya Pradesh who had impressed with a match haul of eight wickets playing aganst the visitors for the Indian Under-25 side earlier in the tour. This included taking all six wickets to fall in the second innings. He was immediately earmarked for bigger things but hardly anyone would have expected him to be selected to play a Test so soon. The pitch promised to help spin bowlers and the West Indies’ vulnerability against leg spin was well documented. All the same the cynics far outweighed the optimists when it came to his selection.

India won the toss and ran up a competitive total of 382 thanks in the main to an electrifying 109 by Kapil Dev. West Indies lost two wickets for 47 but with the remaining line-up revolving around Richie Richardson, Viv Richards, Gus Logie, Carl Hooper and Jeff Dujon there was always the chance that they would come up with a fitting reply.

What followed however was quite unbelievable. Hirwani just scythed through the strong batting and after being 128 for three West Indies slid sharply to 184 all out. Hirwani finished with the incredible figures of eight for 61 including dismissing Richards for 68 with a deceptive googly.

The Indians then consolidated in the second innings before Shastri declared at 217 for eight with debutant Raman topscoring with 83. This left West Indies an unlikely victory target of 416 and an Indian win was on the cards especially with the pitch taking a lot of turn. But no one could have bargained for what actually happened. All eyes were on Hirwani. It would be too much to expect him to repeat his first innings figures but it was taken for granted that he would be among the wickets along with Shastri and off spinner Arshad Ayub.

Astonishingly Hirwani again picked up eight wickets, this time for 75 runs as West Indies were shot out for 160 leaving India victors by 255 runs and a shared series against all expectations. The West Indian batsmen were absolutely clueless to Hirwani’s assorted bag of tricks and went down tamely with only Logie (67) putting up a fight.

Within a few short days Hirwani was transformed from a relatively unknown cricketer to the most talked about in the land. His feat was straight out of the fiction books and put him in the record books. With match figures of 16 for 136 he battered the old mark standing in the name of Australia’s swing bowler Bob Massie who in 1972 at Lord’s had match figures of 16 for 137 the best-ever for a debutant in Test cricket. Like Hirwani he too had taken eight wickets in each innings.

Hirwani’s record still stands as a tribute to his skill and accuracy. And though the rest of his career was largely anti climactic – he finished with 66 wickets from 17 Tests at 30 apiece – he will always have fond memories of his bowling at Chepauk in January 1988 a feat that shaped a notable triumph and became part of cricketing folklore. 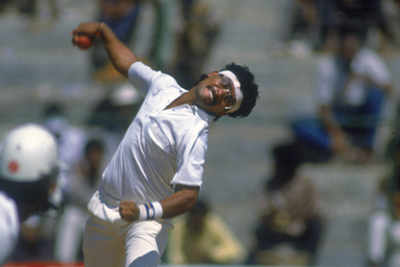