If Chris Gayle stands by his decision to retire from ODIs after the World Cup there is little doubt that he will be missed by the entire cricketing community the world over.

As an entertainer par excellence Gayle has few equals. Not many batsmen have made bowlers look more helpless as he just smashes them for fours all over the ground or for huge sixes into the stands and beyond. And he has not lost his enthusiasm for the game even in his 40th year as he exhibited during the just concluded ODI series against England.

The stats associated with his run making are of the mind boggling and eye rubbing variety. He rounded off an incredible series – 424 runs in four innings at a strike rate of 134 with an innings of 77 in just 27 balls that included the fastest half century (19 deliveries) by a West Indian batsman in the history of the format. He hit 39 sixes from the 316 balls he faced in the series which means that incredibly every 8.10 balls he faced went for a six. And as for the big hits most were simply monstrous.

Gayle’s image as a fun loving cricketer who loves his dance steps almost as much as he enjoys batting has endeared him to cricket fans. The extrovert that he is he relishes playing to the gallery and being the centre of attention. Just the other day while announcing that he would retire from ODIs following the World Cup he came up with lines like ``You are looking at a great man’’ and ``I am the greatest player in the world’’ and ``Of course I am still the Universe Boss. That will never change. I will take that to the grave.’’

Which other cricketer would come up with lines like these? But though Gayle’s approach might look casual he is deadly serious about his game.

Gayle is very much a cricketer of the times. As a professional to the core he always felt it was his right to ply his trade around the cricketing world and a look at his CV is simply astonishing. The number of teams he has played for in the various T-20 leagues is unique. In the IPL alone – and he is very popular in India – he has represented three teams. Such has been the demand for his pyrotechnics that he has commanded the highest figures at the auctions.

All the same whenever Gayle represented the West Indies he did his best for the team and this is underscored by his superb record in international limited overs cricket. And for someone who once famously said that he would not be sad if Test cricket died Gayle did a lot to keep it alive. He is only one among four cricketers to have scored a triple hundred twice the others being Don Bradman, Brian Lara and Virender Sehwag.

Again you would not associate Gayle with the feat of carrying the bat but that’s what he accomplished against Australia in 2009-10 at Adelaide while scoring 165. On the other hand in the same series at Perth he batted in the manner which the cricketing world knows, loves and admires. It was typical that he should hit the fifth fastest hundred in Test cricket – off just 70 balls – and reaching it with a six.

But perhaps this was not a new experience for Gayle for at Cape Town in January 2004 he reached three figures off only 79 balls – and this in the face of a South African total of 532. This no-holds barred approach is so typical of the maverick cricketer.

Gayle did play in 103 Tests between 2000 and 2014 and would have played many more but for hia brushes with authority. And given his batting style a record of 7214 runs at an average of 42 with 15 hundreds is not one to be scoffed at.

Overall however Gayle will be remembered for his exploits in limited overs cricket for his game was tailor made for it. After a 19 year career Gayle has scored over 10,000 runs. A strike rate of 87 with 25 hundreds allied to the fact that he is only one of six batsmen to get a double hundred in the format underscores his brilliance. And as only to be expected Gayle was a natural for T-20 cricket.

He hit the the first hundred in Twenty20 internationals during the inaugural World Cup in South Africa in 2007 reaching three figures off only 50 balls and hitting ten sixes in all against the hosts. Gayle’s batting empties bars and attracts a worldwide TV audience and predictably he has been among the first choices for T-20 franchisees anywhere in the world.

In a lean era for West Indian cricket Gayle’s buccaneering approach has stood out. As the leading personality following the retirement of Brian Lara he has taken upon himself the responsibility of bringing out an upswing in his team’s fortunes – a daunting task given that the team personnel has generally been short on class, skill and experience. But despite his casual exterior Gayle is a thinking man’s cricketer and leading from the front comes naturally to him. His captaincy graph shows more ups than downs.

But whatever his admirable qualities as a leader it is as a batsman that Gayle will attract attention. Tall and imposing at the crease, Gayle loves to carve through the covers off either foot, and has the ability to decimate the figures of even the thriftiest of bowlers. Critics are quick to dismiss his lack of technique, his weakness in defence but batsmen with little footwork or unorthodox methods often baffle the experts and this is what Gayle has done.

His exploits in the ODI series against England has shown that Gayle even in his 40th year remains a major force. 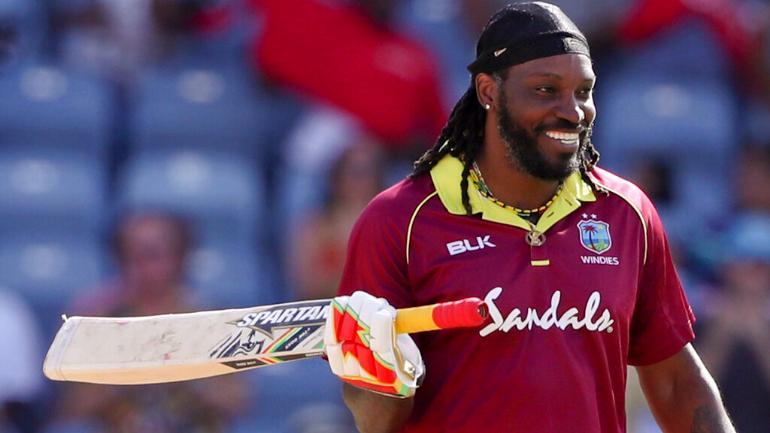