#OccupyUGC: One of the students injured in the brutal police attack

NEW DELHI: The brutal crackdown on students protesting at the University Grants Commission has led to widespread condemnation with more and more students unions coming out in support of their Delhi colleagues, against the government. Kavita Krishan, closely associated with the students and feminists movements in India, writes about the attempts to take over the protest, the larger issues involved that she says makes this a protest against the first footfalls of regime change in higher education, and the similarities with the students movement in South Africa at a time when the government is hosting the Africa summit.

The University Grants Commission (UGC) and the streets around it have turned into a war zone. Students from various Universities 'occupied' the UGC premises for the past several days, in protest against the UGC’s move to scrap all non-NET fellowships for research scholars. In response, the Government has responded with the arrogance and brutality of batons, leaving several students battered and bloodied and concussed.

What is the issue? The vast majority of research scholars in the country rely on the non-NET fellowships to sustain their research. To scrap this fellowship is to tell them that only those who qualify forthe NET-JRF exam will be eligible for a fellowship. The result will be that research in this country will suffer. People will be able to pursue research only as a side-concern to their jobs. And, as anyonewho has done serious research knows, that is virtually impossible.The fellowship itself was pretty paltry - and students had been demanding that it be increased in keeping with steep inflation rising costs of higher education and living. Ironically, a Committee appointed to consider the case for enhancing the fellowship, announced instead that they had decided to scrap it! 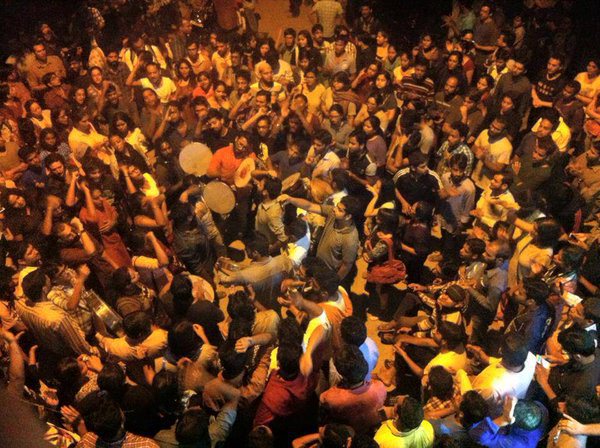 What followed has been remarkable - in scale and in sheer courage.Students from Universities in Delhi - followed soon by Universities all over India, and supported by teachers and intellectuals - rose up in protest. They occupied the UGC premises demanding that the UGC head meet them. Instead of any meaningful dialogue, the conduct of the UGC and the Ministry of Human Resource Development (HRD ) has been shameful.

To begin with, the Akhil Bharatiya Vidyarthi Parishad (ABVP) - student wing of the RSS and BJP - turned up at midnight to indulge in vile sexist abuse directed against women protesters. Then, police intervened in the name of 'preventing a clash' - but did not arrest or disperse the abusive and violent ABVP cadre. Instead, they spirited away the protesting students to the Bhalaswa police station on Delhi's border, hoping this would leave the field free for the ABVP to take up the role of pliant 'protesters' who would then' accept' the UGC/MHRD position. But this was not to be. Thousands of students from Delhi's various Universities flooded the road to the UGC to take the place of their detained comrades, while the students at Bhalaswa went on hunger strike demanding to be released. That day, too, the police responded with a lathi charge, injuring several men and women students.

Even this bout of violence could not disperse the determined students,whose numbers swelled as they held a sit-in at the UGC premises near ITO. They were joined by students from Aligarh Muslim University,Mahatma Gandhi International Hindi University, Punjab University Chandigarh and MD University Rohtak. Also protests were organized in various Universities of the country (reportedly Central University Gujarat, Allahabad University, NEHU Shillong, University of Hyderabad,EFLU Hyderabad and Aligarh Muslim University, as well as TISS and TIFRand Mumbai University, as well as in Jadavpur University in Kolkata).The MHRD then made a devious attempt to divide and confuse thestruggle. Did they consult with the protesting students? They did not- instead they met solely with the ABVP in a backdoor consultation.

How can the MHRD choose to deal primarily with the ABVP before announcing a 'decision' on twitter?! This is not an in-house issue to be settled within the Sangh family!

But that is precisely what the MHRD did. Their 'assurance' on twitter claimed that the fellowships would not be scrapped. But the students correctly read between the lines and realised what the statement implied: only students already receiving fellowships would continue to do so - but in future,students would only get fellowships based on 'merit' or 'economic' criteria! Based on this 'assurance', the ABVP has been trying to persuade protesting students that since they are not in danger of losing their own fellowships, they should withdraw. But the students decided - displaying admirable moral fibre - that their struggle was not merely to protect the fellowships of existing students but those of future generations - and the very future of higher education in India.

The move to scrap the fellowships and restrict fellowships only to those scholars who clear the National Eligibility Test (NET) was correctly diagnosed by students as a move tailored to fit the Modi Government's plans to accept the WTO grouping of higher education under GATS as a "tradable service."

The UPA Government had already made an "offer" to this effect; in the WTO Ministerial talks due in December, the Modi Government plans to seal this "offer" and accept"binding commitments" to make India's higher education a tradable service. It is well known that if India indeed accepts these "binding commitments" under WTO-GATS, the Indian Government would be "bound" to cut subsidies in public-funded higher education, since such subsidies would be seen by WTO as a violation of its "commitments" to provide a"non-discriminatory" "level playing field" for domestic and international traders in education.

Ironically, this is an issue on which the UPA and NDA have had an identical position. The current Government's 'nationalist' posturing is limited to saber-rattling against neighbours and vilifying activists, dissenting voices and minorities within India -they are as eager, if not more so, than previous regimes to surrender the country's autonomy. So, the students are not merely fighting a bread and butter battle - they are fighting against the first footfalls of an impending 'regime change' in India's higher education that will jeopardise the country's autonomy.

The assurance then, failed to contain or confuse the protesters. A peaceful sit-in, addressed by Delhi's intellectuals and University teachers, was attacked by the police resulting in a terrifying lathicharge. One young student was admitted last night in a concussed state, semi-conscious, while other bodies of men and women bore the bloody marks of a brutal police beating.

This Government has had a particularly dismal relationship with its scholars and students. First, there was the attempted muzzling of the Ambedkar Periyar Study Circle in IIT Madras, in which the Government took a punch on the nose. In that matter too, the MHRD was seen acting as an obedient tool of Sangh outfits. Then, there is the stand-off with the ongoing FTII students' protests. There too, the Government has lost the moral and political battle, and stubbornly sticks to a position that has convinced none. Then, you have the arrogant and high-handed response to the wave of dissent and protest by writers and intellectuals - compounded by the refusal of the Government to see the murder of Professor Kalburgi and other rationalists and intellectuals by suspected Hindu majoritarian outfits as anything out of the ordinary.

The Occupy UGC protests are another powerful chapter in these growing voices of protest against the Modi Government's dangerous and destructive attitude towards creative arts, research and institutions of education.

The Government is also losing another battle with the young. The several attempts at moral policing by outfits which boast of closeness to the Modi Government and in fact claim to be part of its 'cultural cleansing' agenda - raising the bogey of 'love jehad', 'rescuing' women by force and beatings from their chosen Muslim husbands,insisting that young people dancing the garba must have cow urine sprinkled on them, to eliminate the danger of Muslims and Hindus dancing together - have not gone down well with the young. A significant section of India's young are unhappy with the attempts to justify violence and even murder of citizens for what they eat or cook, what they think or write or speak, or who they love.

As Indian students' protests intensify, they can take inspiration from the ongoing countrywide shutdown by students in South Africa - who have won the support of workers and teachers too. The South African student movement against fee hikes and privatisation (including outsourcing of University services) is a vibrant one of remarkable strength. The shared solidarity of Indian and South African students, stressing a shared need to resist the WTO-GATS/privatisation regime,can be a useful counterpoint to the official 'Mann ki Baat' narrative on the India-Africa Summit.

Along with higher education, there is another front on which the proposed surrender of the Indian Government to the WTO-GATS regime is a concern, not only for Indian poor but the poor of Africa. The Modi Government, bending to pressure from the US Government and US pharmaceutical industry, has been surreptitiously leaning towards changing its patent regime to prevent manufacture of cheap versions of generic drugs. The poor of the world - especially Africa - stand to suffer - and African leaders have been urging India not to surrender.

The Modi Government's chosen Economic Advisor - even before he assumed this post - had recommended to the US Senate that they initiate action under WTO against India of it failed to comply - another instance in which this Government is being guided by interests that are distinctly opposed to India's own interests and those of developing African countries.

The students deserve our wholehearted support. As in South Africa,every section of Indian society and all people's movements must rally around the Occupy UGC protests.