A tale of twists and turns

Lewis Hamilton’s eighth world driver championship title campaign got off to a winning start but not without a massive scare from Max Verstappen and Red Bull in the season’s lung opener at the Bahrain Grand Prix.

Hamilton broke at least one more record set by Michael Schumacher, of a career best 116 podium finishes, by winning the unconventional season opening in Bahrain - his 97th race victory.

However, it came on the back of a sharp strategy that saw the Brit undercut the Dutchman who started on pole, and ended up finishing in rather contentious circumstances that saw both Mercedes and Red Bull, complain about the inconsistent application of rules.

While there was little to cheer from the midsection runners and the back starters, the action seemed positioned right up front all the way through. That doesn’t mean there was no drama.

Haas’ Mick Schumacher was not only dealing with his team mate going off track, he also suffered an early spin that put his debut under cloud, eventually finishing in the lap times. Incidentally the initials of his father’s name were adopted by him, allowing fans to watch disbelievingly at the ‘MSC’ on the time sheets.

For Sebastian Vettel, it was tough going in a carry-on from last year. The four time drivers champion, who was ousted unceremoniously from Ferrari last year and finished poorly, found his stint with Aston Martin eventful but unimpressive.

Staring from 18th position on the grid and dropping to last over a yellow flag penalty, more ignominy was in store as he bumped into Alpine’s Esteban Ocon to earn a ten second penalty, opening up once more the speculation for seats in 2022, which is said to be in for a drastic change in regulations.

While talk of sprint races to determine qualifying was discussed on the sidelines, the debate soon shifted dramatically enough after Turn 4 at the Bahrain circuit was threatening to become more famous than Hamilton and Verstappen put together by the end of the race.

Verstappen started out on pole position in the grid line up, but soon lost place to the Mercedes top driver over pit strategy, allowing Hamilton to undercut the Dutchman for advantage. Although Hamilton would later have to deal with wornout tyres in the final laps, Red Bull and Verstappen were forced to pay dearly for losing time at the start.

But it was on lap 53 (of 56) that the race was thrown open for fair debate and discussion, when Verstappen, who was fast catching up to a struggling Hamilton, was forced to give up his overtaking position over the Brit over the Turn 4 situation.

The FIA race director, Michael Masi, admitted he himself had made the call to Red Bull, reminding them of fair sporting regulations, after the race stewards contended that Vertsappen gained a significant advantage going off track at Turn 4 to give himself the lead over Hamilton in the third last over of the race.

Promptly Verstappen gave back the place that would have plausibly placed him first on the podium, a move that caused some heartburn in both camps.

Toto Wolff, the team principal at Mercedes, conceded that Red Bull had the measure of Mercedes in Bahrain, and that the very rule Mercedes was protesting had been to their advantage at that late hour to give Hamilton his first win of the season and allow Mercedes to finish with both their drivers on the podium.

Of their narrow escape, Wolff had this to say: “at the end, that decision (by the race director asking Verstappen to return to the lead advantage) actually made us win the race. Max ran wide in the definition of the Race Director, gaining an advantage. He had to give back the position and that saved our victory.”

Christian Horner, team principal at Red Bull, expressed anguish, about how it had been notified ahead of the race that going off the white lines at Turn 4 would not be scrutinised for purposes of race lap times, but would only be found in contention if a driver was seen to be gaining deliberate advantage.

Red Bull and Verstappen were right to point this out, although Masi denied any inconsistency in applying the rules.

Said Horner after the race: “Obviously Max ran wide on the pass there, which had been made clear before the race that if someone got an advantage by going out there, they’d have to give it back. He that immediately, the team instructed him to do it following Race Control instructing us.

“With these track limit things, they’re always going to be contentious. But we do need to just have a consistent situation. You can’t say it’s okay to use in the race, but you can’t overtake out there. It should be black or white, it shouldn’t be shaded grey.”

Horner also revealed that Red Bull had raised the matter of Hamilton’s track advantage to Race Control. “We could see as soon as Mercedes started to push, they just used that part of the track. We questioned with Race Control that if that’s the case, can we do it? In a nip and tuck battle, there’s a two-tenths advantage using that part of the circuit. So Mercedes did it lap after lap. The Race Director then asked them to respect the limits otherwise they would get a black and white flag.”

Mercedes did accept that there were grey areas to the rules. Wolff said of the contentious Turn 4 issue, “They need to be clear, they need to be sacred and not a Shakespeare novel that leaves interpretation… It needs to be simple so they don’t need to carry the document in the car to read it and remind themselves what actually is allowed and what not.”

Speaking to fact, Red Bull pointed out that Hamilton himself had been earmarked by the stewards to suffer a black and white driving standard warning for overstepping the white lines and going off track no less than 29 times in the course of the race.

Although eventually Mercedes were warned by the stewards, Red Bull contested the argument that fair play was in order when the margin of victory was only 0.745 seconds while they believed Hamilton had gained valuable time repeatedly at the start of the race by going off track at Turn 4, eating into Verstappen’s ability to build a lead before the pit strategy came into play.

For his part, Masi denied inconsistency or ambiguity. “It was mentioned very clearly in the drivers’ meeting and the notes that running out of the track limits during the race would not be monitored with regard to setting the lap time, so to speak, but it will always be monitored in accordance with the Sporting Regulations - that a lasting advantage overall must not be gained. Nothing changed at all during the race.”

Lost between the lines was the issue raised by Red Bull, that Hamilton was going over the tracks too often and therefore steadily gaining the advantage. That Hamilton was eventually sanctioned with a warning to the Mercedes suggests that Race Control did take note, and did concur with Red Bull, at least in principle.

Verstappen was far from gruntled. Nevertheless he stated he had yielded the position almost immediately, with the result of the race hanging in the balance, because it would have been unfair and unsporting to build up a lead in those final laps when no penalty could be imposed on him or his team.

Verstappen was never quite in a position to exert a real threat after that, and Red Bull had to see their lead whittled away at a track where they haven’t won since 2013.

That seemed to give Hamilton some final traction, although by his own admission he could only breathe free after crossing that Turn 4 on the final lap, knowing victory would finally be his. In what became a battle for endurance, what ultimately got Hamilton across the line was some champion style defensive blocking and racing, tyre management, and ultimately calm under pressure to move first across the chequered flag.

“It was horrifying,” Hamilton later described. “It wasn’t great. I was struggling obviously at the end with the rear end of my car, my rear tyres had gone off, and they were maybe eight laps older maybe more, to Max’s tyres. I knew he was going to catch me with ten laps to go and I was thinking it was going to be pretty much impossible to hold him behind, which in fact it was up until the Turn 4 incident.”

As Wolff put it, “The racing gods were on our side and that’s why we won. It’s not that we have found suddenly some awesome performance. It was a combination of great strategy, a solid race car and then just being fortunate at the end.”

It is also a recipe for great races, and Bahrain certainly kicked off Formula One’s 2021 season in style.

Although the next race is at Imola and expected to be Ferrari’s moment, the relatively quiet start by Charles LeClerc and the overcautious approach of new inductee Carlos Sainz was so completely overshadowed by the Hamilton-Verstappen chase that it seems hardly likely that red will be the colour in race 2.

It might just come down once more to being another battle of wits, pits and defiant racing on track, between the seven-time champion and his strongest contender.

As Hamilton himself put it rather modestly, it’s “going to take everything and more” from Mercedes and himself to prevent Red Bull from making good their threat to push the leaders out of top contention. 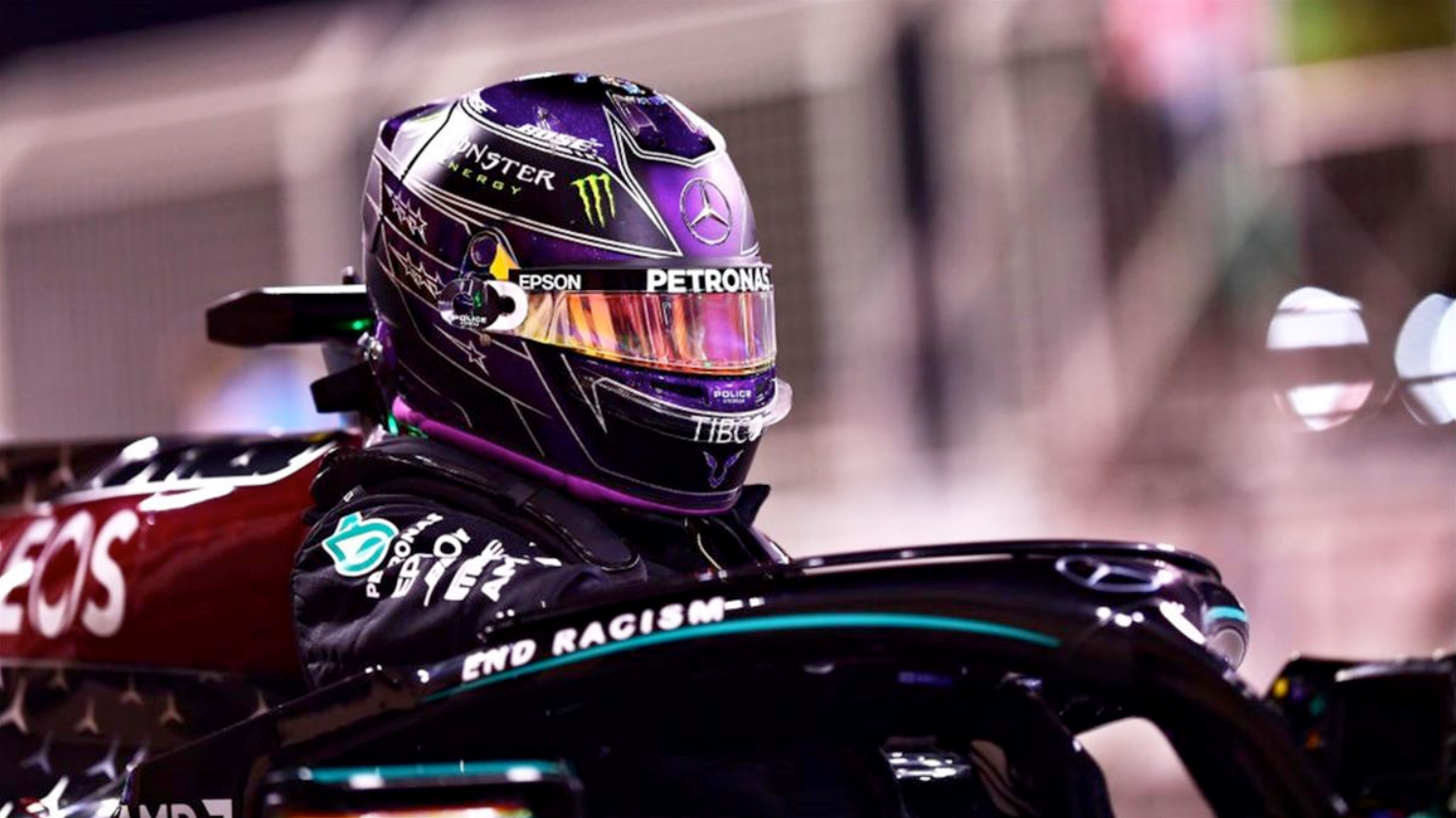