Recent times have seen a flood of books on Lucknow. Lucknow: Wandering in the Lanes of History 1700s and 1800s by Nasima Aziz is the latest, and a welcome addition to a wealth of information already available on this unique city.

There are chapters on the imperial history of Lucknow and on its rulers. However most interesting is the trivia and gossip collected by the author about citizens with multicultural backgrounds whose contribution in making Lucknow so cosmopolitan is not celebrated the way it should be.

Nawab Asaf adored Sophie Plowden’s children, gave them toys, and placed a garland of yellow jasmine around her little girl’s neck. When Antoine Polier left Lucknow and returned to Europe, his young son George, called Babajan in one of his letters, stayed behind in Claude Martin’s guardianship. Later George was sent to study in England under Helene Bennet’s care-Helene was Begum Nur Haleema of Lucknow.

There were live-in relationships: Lucknow’s Begum Fyze Baksh lived with Major William Palmer for 35 years. There were affairs: Warren Hastings met a married woman on the ship coming to India-that’s where it started. John Brandon, the gardener of Nawab Naseer, married Mary Ann, the daughter of the Nawab’s barber, George Harris Derusett.

The author is gifted with a compulsive-organiser brain and has sorted the mass of information collected for over a decade, into neat packets of three.

Chehel Pehel in the Lanes pulls readers out of the court of rulers to give an overview of people on the street, institutions and events that have made Lucknow such a special city. There is mention of a place in England where East India Company employees were trained before being sent to work in India. There are anecdotes about Lucknow’s Urdu poets; the mode of transport in those days and the birth in the city of commercial printing, and lithography.

I love the read titled People’s Magazine and on the knowledge communities responsible for managing the city in such a way that its reputation was elevated to Paris of the east.

We lay out the pages of our history on a structure that is held together by registrars, qanungo, patwaris, scribes, record keepers, clerks, copyists, calligraphers, letter writers, news writers, accountants, auditors, assistants and munshis- all speaking and writing perfect Persian, and fluent in the local vernacular as well. Most of these people were from the Kayastha community of north India and from the Khatri caste. They functioned side by side with a highly educated community of Kashmiri Pandits.

Lucknow became Lucknow because the rulers hunted out the best talent found in every community irrespective of the religious and caste background of citizens to administer the region of Awadh. The Kayasthas were promoted to a critical link in society’s multiple relationships. They were made equal participants with the elite in matters of language, diet, dress, mannerisms, lifestyle and etiquette. While they never intermarried or converted to Islam, they shared many common experiences such as primary education, and qawwali at the sufi dargha with Muslims. Shiva Das Lakhnawi, author of the well known Shahnama Munawwar Kalam, was an active member of the Chishti Sufi circle.

In Lucknow, the Kayasthas enjoyed positions of responsibility as ministers. Along with the ruling elite they celebrated Eid, commemorated Moharram, and built imambaras. The Persian language was used by the bureacracy for practical purposes to earn a living but it was also a language of self expression. In his study of the Persian language the munshi trainee went into the depth of Persian literature and poetry, reading classics like the Bustan and Gulistan of the great Persian poet Sadi.

There are colourful portraits of interesting people like the beauty called Shamsunissa Begum. She was the teenaged poet wife of Nawab Asaf, famous for giving Lucknow a Constantinople like skyline.

Shamsunissa lived all her life in her own apartment. It was only after her death that she was laid permanently next to her husband in the grand central hall of the Asafi Imambara. More needs to be written on the relationship between these two passionate individuals whose marriage was probably not consumed but who remained soul mates and in touch through their common love for poetry.

Was Shamsunissa sympathetic in helping Asaf come to terms with being homosexual, wonders the author who has translated couplets from an Urdu divan written by Shamsunissa with replies from her husband.

Shamsunnisa says that wherever you cast your gaze benign, there the garden of Eden is all that I see:

And Asaf replies that with my rivals you have met and joined in a contract, injustice around me is all that I see:

Kashmiri Pandits were fluent in the Persian language and backbone of the Mughal administration in Delhi. They reclocated first to Faizabad around 1722 and later to Lucknow in 1775 to settle down in a brand new neighbourhood called Kashmiri Mohalla. This neighbourhood gave birth to many scholars, poets and writers in Persian and Urdu one of them being Ratan Nath Dar Sarshar born here in 1846.

Following the family tradition he learnt Arabic, Persian, Urdu and English. He was a school teacher and wrote for the Avadh Punch, a popular journal. Munshi Naval Kishore gave him a job as editor of Avadh Akhbar. His greatest contribution to Urdu literature is Fasan-e-Azad serialised daily in the Avadh Akhbar and made the circulation of the paper boom.

Sarshar’s protagonist Azad is shown emerging out of medievalism. He champions modernity and is constantly falling in and out of love. He has a sidekick called Khoji who is very funny and together they travel around places like Lucknow sketching a wonderful portrait of what the city must have looked like in those years.

At the Charbagh Railway Station in Lucknow Azad says that he witnessed a carnival.

“Lord what a carnival this station is! Is there any end to it? The crowd, the clamour, the bustle-really, Lucknow is quite a place! Lord I have never seen such a station”. Strolling on, Azad went along the station. When he saw the restaurant, he grinned widely with pleasure. “Oh my, how orderly and neat it is-the walls and doors are simply oozing cleanliness”. Everywhere it is like a world of light.

Little wonder that Lucknow poets continue to compare the city to paradise on earth. It is now the responsibility of contemporary citizens to nurse the fabulous reputation of Lucknow as an eternal garden of Eden where hate and violence against each other has no home in any neighbourhood of the city.

Lucknow: Wandering in the Lanes of History 1700s and 1800s by Nasima Aziz is published by Supernova, 2019 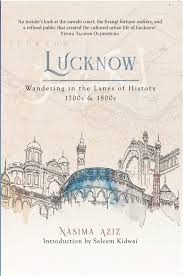 Krishna Sobti Died Disturbed About Threats to Freedom: “Not The Time for Silence!”