Mahua, A Play That Draws on Adivasi Exploitation in Odisha

Mahua is the crux of tribal lifestyle

This writer, soon after writing an investigative piece on how illegal mining and industrialization in large pockets of Odisha by corporate big houses was destroying the lives, lifestyles, culture and survival needs of local adivasis was invited to a one-hour presentation of a play Mahua, on the same subject focussed on a single young man, Birsa, who refuses to sell his land to the business houses and how his life ends in tragedy.

Mahua is a part of Atelier’s Campus Theatre Festival, Season 11, which is the most sought-after theatre festival in the Campus Theatre circuit across the country. The play was recently staged in Kolkata at the intimately spaced Padatik Theatre. The entire cast and crew is comprised of students of Leher, the dramatic society of DCAC (Delhi University). But their performance belies their youth and therefore, comparatively less experience in theatre.

The backdrop of the play throws up the utter exploitation of the adivasis of tribal belt, Bihabund in Odisha, an area in which its inhabitants- the indigenous people, who have been staying there for generations, are facing a double threat of displacement and of danger to their lives and lands. They are either tempted with high prices offered for their land which is theirs through generations, or the fear of arrest, or death. Any kind of rebellion is responded to with death. And every rebel is labelled “Maoist.” Whether they get this “price” is anyone’s guess.

Against this backdrop, we find that the 20-year-old Birsa is unwilling to give away his small plot of land to the mining and industry-greedy industrialists for what sounds like a ‘princely’ sum of Rs.1 lakh. His grandmother, who has brought up the orphan since he lost his parents when he was nine, loses her office as head of the village panchayat but urges Birsa to run away to the safety of the city. But the price she had to pay for this is her position and her promise the leader of the neighbouring village the hand of her grandson to his daughter Gilli (Mansi Singh), who is 12 years older and is unmarried because she is believed to bring bad luck to everyone. Birsa had reportedly initiated a tussle between the two villages and so the ‘punishment.’

Birsa’s house assumes some semblance of order when Gilli arrives as she looks after the very bare home and hearth and also takes care of Birsa, snatching away the bottle of mahua he is addicted to. But mahua, made of the flowers of the mahua tree that grows in abundance in the adivasi areas is not just an addiction. It is a metaphor that stands for the very life and culture of the adivasis in the area.

Mahua is the crux of tribal lifestyle, not only for its addictive properties but also the flower, fruits and leaves that provide food, fodder and fuel to the tribal life. The Mahua flower is used for medicinal purpose too and tribal people make varieties of edible out of it. Out of Mahua fruits they make oil.

But in this play, mahua, the addictive drink defines an escape route for Birsa who is trying to drown the tragedy of having lost his lady love to his best friend Birbal (Sumit Bishnoi) who is constantly trying to persuade him to give in to the demands of the industrialists, take the money and move on with Gilli or take the position of the Panchayat head in place of his grandmother. 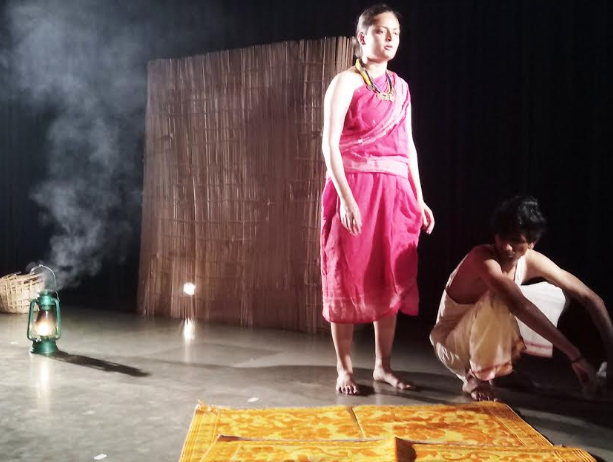 But Birsa wants none of these. Nor will Gilly allow him his daily dose of Mahua. The two, through their constant fights and squabbles, fall in love and take care of each other. Another friend Kindo (Ravi Kalra), arrives in a different gear – he has joined the Maoists to rebel against the industrialists and miners and corporate giants – tries to persuade Birsa to join them but Birsa is confused.

Finally, they move on to a place near an army testing camp where the air is dotted with sounds of bombing and firing trials while their penury reaches dangerous levels but they cannot do anything about it. The play is silent about whether Birsa got the Re.1 lakh for his land or not. Gilli is grievously injured when a shell drops into their shanty and Birsa tries to save her in the only way possible. The lighting is superb, often lit with a central overhead light falling centre stage, or a lantern used as communication between Birsa and Gilli.

The sets are sparse and just right, with objects that are shifted now and then as the drama demands. The costumes too, are fitting to the culture they belong and their language is in some Hindi dialect but spilling over with cuss words.

Akash Mohimen’s original play directed by Ravi Kalra takes care to flesh out every single character to give it credibility. The actors are superb though quite a section of the audience may be shocked by the frequent use of invectives and cuss words in the dialogue. But as one director (Arun Roy) who has lived with tribals for three long months for a film, says, these invectives for them, are neither cuss words nor invectives but form part of their everyday, colloquial speech. So, the dialogue should be taken in its true spirit and essence.

Besides, they do not hurt your sensibilities at all because firstly, the way they deliver their lines is very casual and secondly, you get used to it. Almost every sentence is a learning experience for those who are not familiar with the language they speak in. But the actors have done their homework so well that in terms of costume, make-up, body language and dialogue, that together define their acting, they are brilliant.

The establishing moments are filled with an Odisha tribal song on instruments that are drawn possibly from the tribal belt itself. The music is muted and there is a lot of right emphasis on the sound design which enriches the ambience of the play. However, having said that, Birsa’s character is dotted more with confusion than with clarity that does not show his leadership qualities and throws him up more as an ordinary man than one who would become a leader. But that is what he is – an ordinary man filled with self-conflict.

Secondly, the second half of the 50-minute play shifts its focus from the oppression and exploitation to the love that mutually grows between the quarrelsome and feisty Gilli and the morose and depressed Birsa which takes away from the razor-sharp edge of the oppression by the powerful of the weak, the rich of the poor and the mainstream of the adivasis. 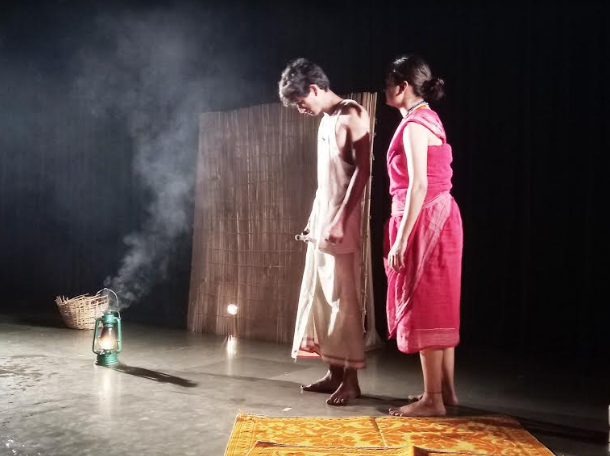 The negative side of the entire performance lies squarely on the shoulders of Padatik Little Theatre which lacks a proper acoustic system. A sudden thunderstorm, drowned the dialogue and the sound effects entirely towards the last few minutes of the play. The roof of the theatre was also leaking and we caught drops of the rain on us.

Does the title Mahua fit the play? That is best left to the audience.