NEW DELHI: ‘Apna Time Ayega’ sang hundreds of women who marched through Delhi this afternoon for equality, for rights, for justice, for secularism. Students, professionals, activists joined hands for change and ‘azadi’ from oppression of all kinds.

“This march is against attacks on minorities, Dalits, women, LGBT. This is not just a march confined to women issues but women talking about other issues that concern us as a nation,” said Purnima Gupta in simple words. Crime against women, she said, has always been a problem but it has seen a steep rise in the past five years. Not just physical crime, but digital crime where women are abused and threatened.

LGBT rights activist from Andhra pradesh Venkatesh was clear, “this march is to ensure equality for all, including women, transgenders, and LGBT. Our major demand is to ensure that we are treated as equals. Nothing more, nothing less. Crime against these sections has gone up under this government because of the impunity the mobs enjoy with their people being in power. The government provides impunity to the perpetrators and they carry out crimes without fear.”

Husain Ara Khan, from a low lying area near Badarpur said she had come here to make a difference. “To ensure that the fight for women rights is not confined to elite women. We have been the major sufferers of violence. We want to send a message from here, enough is enough and crime and violence against marginalised communities must stop. 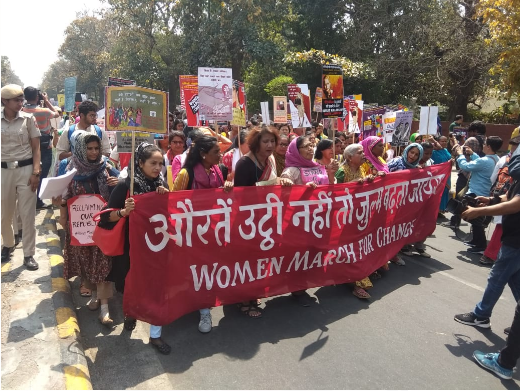 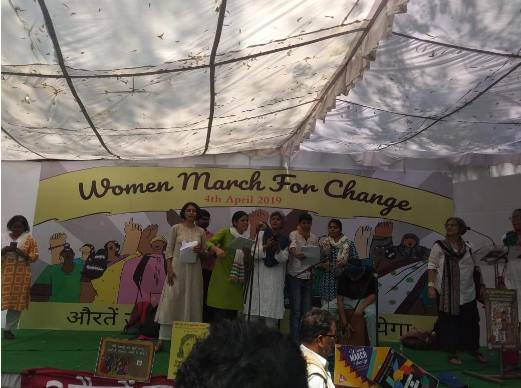 For Bhash Singh the march was a revolution, and would spread across the country. “We will teach this government that it cannot get away by attacking the Constitution of India. They cannot get away by attacking the minorities, the Dalits.” She said that the divisiveness and hate that the government was spreading will not be tolerated. And added, “Mohan Bhagwat (RSS chief) should know that women are not children producing machines.”

Nandini Sundar said that the fear of law has disappeared,where people can kill and rape little girls like Asifa with impunity. This impunity is new, it was not there before.