In 2000 43 women led by Nirmala Deshpande and Mohini Giri took a Women's Bus of Peace from Delhi to Lahore. Didi, as we lovingly called Nirmalaji, taught us this song:

Didi told us that this was the song of Vinoba Bhave when he set out on his 80,000 km yatra across India to find land for the landless. Yesterday this memory came alive for me 17 years later in a hall crammed with people, mostly youth, who had collected to launch a calendar, Aaghaz e Dosti 2017.

It began in 2012, an idea born in minds of youth of India and Pakistan, one simple idea- to build peace between these two beleaguered countries. For this they collected school children who were asked to paint their idea of friendship between peers on both sides. They found teachers who encouraged the kids to express their very own vision in their art. Schools from Karachi, Lahore, Swabi, Toba Tek Singh, Gwadar and Khyber Pakhtukhwa took part from Pakistan side. In India the schools were from Dehradun, Delhi, Cuttack Mumbai, Kolkata, Surat, Vadodra, Bulandshehr, Lucknow. 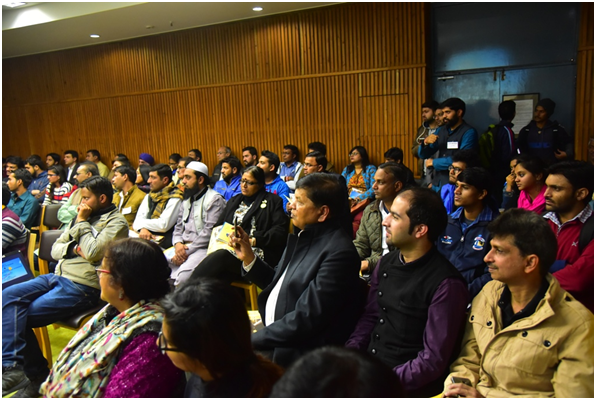 When children talk peace it is a head wind which propels the vessel. That was my first feeling when I entered. A quarter century of struggle for peace in South Asia has exhausted many of us. But what I saw in the jam packed hall was stunning; it was joie de vivre bubbling at the brim.

The Calendar has 12 paintings. Each painting has a story, a few young artists told us why they painted what they painted. For example there was Tanvi who painted the Indo Pak border. She knew that the border is famous for its hate spewing drill every evening, watched by hundreds of Pakistanis and Indians on either side, jeering and cheering. So she painted little girls and boys with naughty smiles, who were armed with knives and scissors with which they were cutting the barbed wire. The words inscribed on their mutual sky were ‘Breaking the knots/ Our young tots’.

All 12 paintings were outstanding works of art. The response to their call for paintings was so overwhelming that this year they started a runners up category. It was one in this category that struck me. Artist was a boy Johar from Gwadar in Balochistan. It showed Mohammad Ali Jinnah and Mahatma Gandhi on either side with the two flags and two clasped hands in the centre. The recent despicable move here to appropriate Gandhi by those who were responsible for his killing, has luckily not reached neighbouring children yet.

Hundreds of organisations have been working since three decades on both sides to bring sanity to Pak India relations. I have been associated a group Pakistan India Forum for Peace and Democracy since 1994 when it was formed. the best public minds on both sides were part of this initiative. Nirmal Mukerjee, Amit Mitra from here and Justice Dorab Patel and Mubashir Hasan from there, to name a few.

In 1998 at a Kolkata Joint Convention where 100 Pakistanis were granted visas, thousands of local women and men joined them in a walk for Peace in the streets of the city. Almost nineteen years later the visa regime has become so harsh that four years in a row the Joint Convention has been cancelled on account of visa refusal from both sides. Instead of opening up the knot or shall I say, the noose, has tightened. Between the night of August !4 and 15 Kuldip Nayar one marathon runner for peace, still lights candles at the border but how little difference has it made to the hawkers of surgical strikes?

It is this dwindling hope which was rekindled at yesterday’s calendar launch. The three speakers at the podium were stalwarts of the movement. Dr SN Subba Rao, Gandhian in its best and fullest sense, spoke of Jai Jagat in the same breath as Jai Bharat and Jai Pakistan. At age 88 his mind, voice and expression cast a spell of wonder. Kamla Bhasin a crusader for Pak India since 1975, who identifies herself only as a South Asian, spoke of one month courses she runs for young women of the region where they live within each others’ identities.

Col (Retd) VS Verma who with Didi founded the India Pakistan Soldiers Initiative for Peace, after he fought 2 wars realised the folly of armed combat. We listened to teachers who are today’s Shanti ke Sipahi, inspiring their small foot soldiers to fight for peace. One teacher from Chandigarh said she has ‘family’ in every province of Pakistan since she decided to open her home and heart to this initiative. Without ever going there she has become ‘khala’ of hundreds of children from the other side.

The calendar has been launched in Lahore, Toba Tek Singh and Peshawar and will be launched in Karachi. After Delhi the launch will travel to Panipat, Chandigarh and Kolkata. The two faces of this movement that I identify it with are Ravi and Devika who approached me. But there is a team of a dozen youth who carry the burden here. A similar team is carrying the torch in Pakistan, girls and boys, teachers and mentors. There is a diaspora team being formed in other parts of the world. Let this kingdom grow and grow.

Among the visionary sponsors and supporters whose names are inscribed on the calendar, I was happy to see Panipat, my hometown, in the form of Hali Panipati Trust. This organisation hosted those people from their hometown who had been forced to migrate to Pakistan in 1947. Their homecoming created history. Back in 1999, this was the best Ghar Wapsi until almost 20 years later when it became the expression for hate.

Let Aaghaz e Dosti become Tehreek e Dosti, said Krishan Mehra, a man who was born in Peshwar whose lawyer father was an Urdu poet, who wrote the finest Hamd in praise of Prophet Mohammad. My generation grew up listening to a song from V Shantaram’s film Jagriti.

At last, Aaghaz e Dosti is doing just that.