Mee Raksam, directed by his son Baba Azmi, embodies his body of work

Thanks to progressive Urdu poet Kaifi Azmi, a kind of socialism is alive and kicking in Mijwan.

Kaifi was born a hundred years ago in Mijwan and died here in 2002. A host of events commemorating the wonderful life led by the poet and the rich body of work left behind by him will be held throughout the year to culminate in the release of Mee Raksam, a film directed in the same village by Baba Azmi, the poet's cinematographer son.

Apart from mango orchards and fields bursting with a sea of yellow flowers of the arhar dal, the skyline of Mijwan is dotted today with female students peddling pink bicycles donated to them by the Mijwan Welfare Society founded in 1994 by Kaifi.

The girls could be on their way in, or out of the Kaifi Azmi School or College, the Computer Training Center or the Tailoring and Sewing Centre.

Ask Baba what his father said to the family in Mumbai when he decided to return to the village, and be told that Kaifi came back to Mijwain to fulfil his dream of helping girls to become emotionally and economically independent.

Mijwan is further woken up by the arrival of Baba's film crew to direct Aditi Sharma, a 15 year old Mijwan maiden. The gesture is perhaps symbolic of Kaifi’s dream come true. Aditi plays the lead role of Maryam in Mee Raksam whose passion for dancing is encouraged on screen by her Kaifi-like father. Lucky Aditi is sharing screen space with seasoned actors like Naseeuddin Shah and Danish Husain.

Meanwhile meet Aditi’s older sister Manisha, another smart young lady of Mijwan who is preparing to study medicine. Nirmala is the mother of the girls and has a full time job at the post office in Phulpur, two kilometers away from Mijwan.

The population of Mijwan is not more than 500 people.

Yet the villagers have access to an ATM, railway station, electricity, running water, roads, postoffice and an Inter College for Girls.

This is all because Kaifi decided to return to Mijwan in the mid 1970s to spend the rest of his life amongst those who till the land to feed the world but personally remain starving and poverty stricken.

In this tiny village nestled in between the lush green fields of eastern Uttar Pradesh in district Azamgarh, Kaifi was born to a feudal family of landlords. He was called Syed Athar Husain and was one of the youngest of a brood of several brothers and sisters. While other children of this traditional Shia Muslim family loved listening to the grandmother tell them fairy tales, Kaifi had pestered his elder sister to read to him the tragic incident of Karbala as recited in verse by Mir Babar Ali Anis, the 19th century wonder of a poet.

Mir Anis was born in Faizabad and he died in 1876, in Lucknow. He wrote that at Karbala, the traveller is undone! An assault upon a Syed, loved by all! In foreign lands can battle ever be won?

Kaifi considered Mir Anis a great storyteller, greater perhaps than his beloved grandmother. From Anis, Kaifi learnt to love Imam Husain, the younger grandson of Muhammad, the Prophet of Islam who did not think twice about sacrificing his life in Karbala in 689, for the larger good of humanity.

After knowing the role of Imam Husain in the battle of Karbala, Kaifi was ever hopeful that the flag of freedom will unfurl one day when the world welcomes once again the great lion of Karbala.

The 7th century incident at Karbala, a city in modern day Iraq gave Kaifi courage to never give in to any act of social injustice, ever. Mir Anis recites in his elegiac marsiya:

Give me allegiance, for I mean no harm. A cooling draught shall I give thee to drink.
Husain replied: Ah wretch, respect Islam! the son of Ali takes no gift from thee. From your hand water is but dust to me.

That Kaifi was inspired by Karbala never contradicted his firm believe in progressive socialist ideas of contemporary times. In fact certain traditions that he carried in his heart from Mijwan to the city only helped to soften his socialist sensibilities.

All the good work started by Kaifi in Mijwan is continued by Shabana Azmi, veteran actress and his daughter. Shabana has bought the thatched roofed mud walled house where her father was born and without knocking it down may restore the premises into a museum.

Kaifi started life in Mumbai in 1947. He had left Mijwan even earlier to study theology in a Lucknow seminary, perhaps around 1933. He was a teenager then, and instead of playing hide and seek with the elusive idea of God, he organised the students into a union and went on strike for one and a half years. Naturally he was expelled from the seminary. That put an end to Kaifi’s formal education. But he read voraciously and wrote heart warming poetry even when he was very young.

He was not yet 20 years old when he joined the Communist Party of India. After his death, his membership card was left in the pocket of his snow white kurta and it went with him. Kaifi was part of the Progressive Writers Association that was inaugurated in Lucknow in 1936.

Apart from the time he spent with labourers and workers, in Lucknow he made friends with progressive poets like Ali Sadar Jafri and Asrar ul Haq Majaz all of whom were inspired by the success of the 1917 people’s revolution in Russia, and staunchly believed that salvation lay in doing maximum good for others.

After independence when Kaifi decided to move to Mumbai, the film industry was the last thing on his mind. It was his concern for the plight of countless workers in the textile mills of Kanpur and Mumbai that made him want to work and to live in their midst. Kaifi continued to point out social injustices in his poems, and in the many songs that he wrote for Hindi cinema like now that I am gone after having given my soul and body to the country, this land is the responsibility of all those who are still alive.

In 1973, at the age of 54 years Kaifi suffered a stroke and the left side of his body was paralysed forever. In that moment he realised that his search for a new world, a new earth and a new heaven remained unrealised.

In the city he had found himself standing for far too long amidst a jungle of faces that did not resemble the countenance he looked for. He felt a strong longing to return to the place of his birth. His hope was to enjoy the embers found in clay stoves in the mud home of his ancestors, and to witness once again the smoke that curls up from the kitchen to signal warmth of life in the countryside.

Even as he was moved to tears when he heard details of the circumstances in which Imam Husain was martyred in Karbala, Kaifi was loud in questioning what the brouhaha over the search for God is all about at a time when he is unable to find a single human being who speaks the same language as him.

Once he returned to Mijwan, Kaifi discovered that the home he was born in was occupied by another. There was no road that he could use to drive to the neighbour’s home where he stayed as a guest till he built another home in Mijwan in 1883.

Sitaram is a farmer in Mijwan who tills the few acres of fields that still belong to the Azmis. He has no idea how old he is but almost half a century ago when he had brought Kaifi into Mijwan in a palanquin he was a young man who was a storehouse of strength.

“There were four of us who had carried the palanquin through the fields with Abbu in it. Today I am the only one who is alive and all the palanquins in the village have rotted away,” says Sitaram, a regular visitor to Fateh Manzil in Mijwan, the home Kaifi built, and named after his father Syed Fateh Husain.

Today Kaifi is Abbu, and Shaukat his actor wife is Ammi for everyone in Mijwan. Sanjogita, head Mijwan Welfare Society’s Tailoring and Sewing Centre recalls routine walks with Shaukat Ammi along mud dividers in between fields, to buy vegetables and other groceries two kilometeres away in Phulpur. Sanyogita was a teenager then, and has been close to her Shaukat Ammi ever since.

Later when she read Shaukat’s memoir Kaifi and I she had giggled so much because her Ammi, she said had already told her everything that is mentioned in the book.

Sanyogita learnt sewing and embroidery at the Center adopted in 2010 by Bollywood designer Manish Malhotra. She recalls sitting at home whiling away time and performing the usual household chores. One day she was summoned by Abbu to Fateh Manzil and introduced to Runa Banerjee, co founder of the Self Employed Women’s Association in Luckow (SEWA), an NGO providing employment to poor women.

Runa was visiting Mijwan and she invited the women of the village to learn to embroider and to sew. Some of the women agreed but most were reluctant. A few of them sat in an open verandah initially, to sew. Soon a boundary wall came up around the group of female tailors. A toilet was added and even later the same activity found home in a modern three floor building, with Sanjogita as chief trainer.

Today the center has almost 400 women on its roll who embroider and sew mainly for Manish and through him for international customers as well. Sanjogita says that there is enough work for all the 400 women in the village and for more. The women enjoy a fairly decent income and all of them have a bank account of their own. They have made sure that their children go to school.

Now if this is not socialism, then what is? 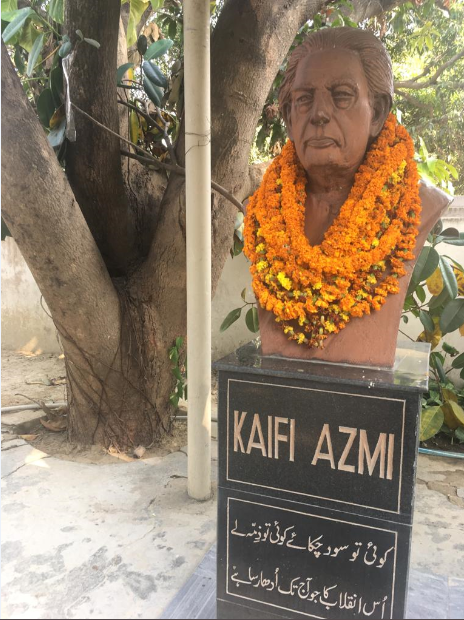 Bust of Kaifi Azmi in Mijwan, his village 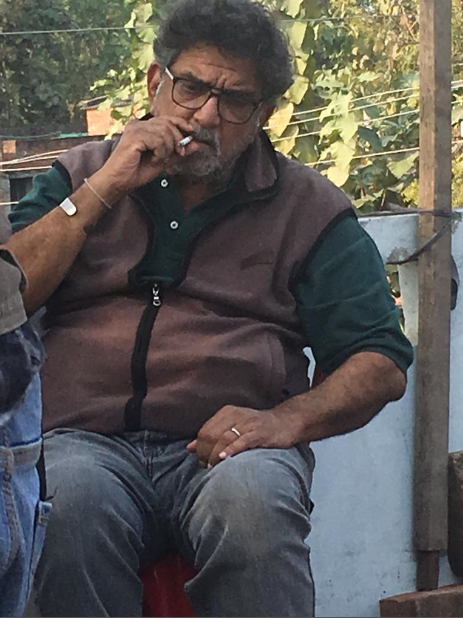 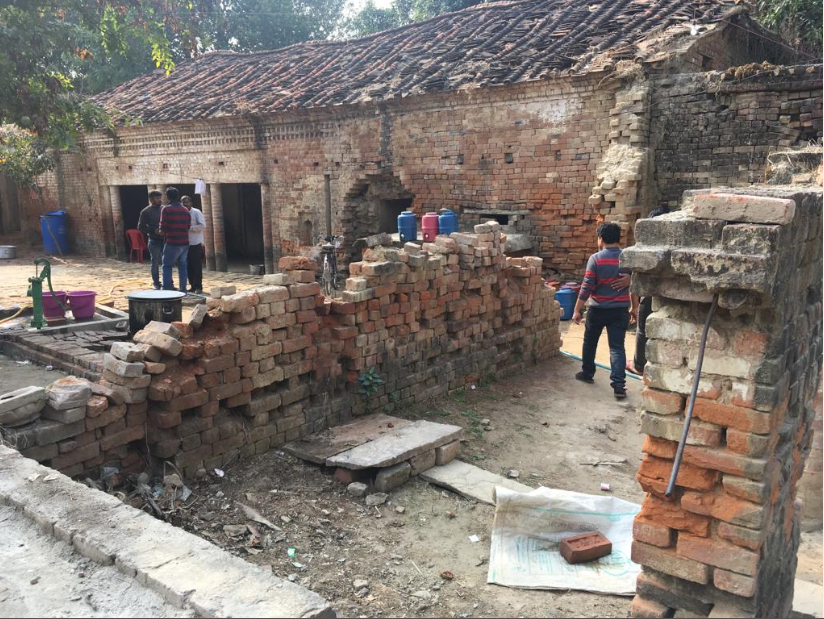 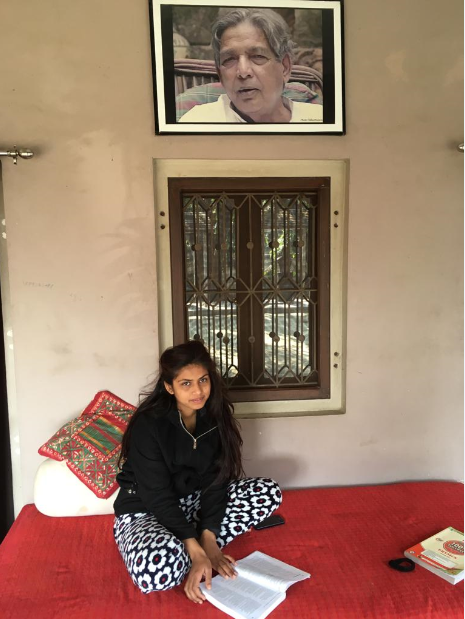