“I Owe My Life to Rakhi”: Azra Qureshi Who Barely Survived the 2013 Muzaffarnagar Violence

A story of deep tragedy and hope

NEW DELHI: Eighteen year old Azra Qureshi, today is a symbol of hope and resilience against the politics of hate and violence, and also a grim reminder of the disastrous consequences of communal violence.

Azra, a resident of village Bhudi in Shamli district was a victim of violence that engulged Muzaffarnagar and adjoining areas in western Uttar Pradesh in 2013. Physically injured with her left hand testimony to what she went through, Azra does not want to let the memories haunt her. She wants to move on.

Azra, just 12 years then, witnessed three murders before her hand was literally chopped off by the mob that attacked her house and killed her family members.

But she today seeks solace in a memory that is more soothing. A journalist Rakhi became her saviour. Rakhi died of cancer herself, but Azra’s mother fills in the gaps in the story of love and compassion.

“I can never forget what happened that day. I saw three of my family members being shot one by one in front of my eyes at Lhasa village in Kairana. And then the rioters who had barged into our house with guns and swords and hack saws tried to chop off my daughter’s wrist from her hand using one of these. We had lost all hope of her surviving. Muzaffarnagar hospital had referred her to Meerut citing its incapability to deal with her injury. This is when we met a young journalist from Delhi who had come to speak to us for work but after seeing Azra, she left everything behind and resolved to get her treated in Delhi,” Khairun Nisa, ( Azra’s mother) told the Citizen .

Expressing her gratitude towards the journalist and people like CPI(M)’s Brinda Karat who supported her, Khairun Nisa said that if it had not been for them she would have lost her daughter as well. “ Rakhi, contacted Brinda Karat in Delhi who arranged for Azra’s treatment at the All India Institute for Medical Sciences,” she said.

The challenge was then how to get to Delhi, when the entire region was burning and no one was safe.

“Rakhi, had made all the arrangements for Azra’s treatment in Delhi. But then the challenge was how to bring her to Delhi. The journalist couldn’t get her on her office vehicle since what she was doing was not part of her work. She took a big risk then by arranging for a private cab and travelling with Azra to Delhi in those extreme conditions all alone by herself. It was only after they reached Delhi and treatment started that we were later called to be with our daughter,” Kharin Nisa said.

After years of treatment now Azra has her hand somehow in shape, but even now it is not back to normal. The doctors, she said, have assured her that it will improve with time. Now an 18 year old, Azra is studying in Class 6 in a government school in the Shamli district of UP. She wants to become a doctor.

On being asked how difficult the journey since has been, the shy young girl reluctantly says she has moved on and does not want to remember all that happened to her then. However, shesays that despite not wanting to recall all that happened with her now she is grateful to god for having her connected with people like Rakhi and others at the All India Women Democratic Association who helped rebuild her life .

“I do not want to live with negativities in life, I do not want to think about people who attacked us and killed our relatives, I would rather like to become like the doctors who saved my life. I want to move ahead and myself like medical doctor one day. “Azra told the Citizen.

Speaking to the Citizen, Brinda Karat accused the RSS and BJP of orchestrating the Muzaffarnagar riots for political benefits.

“The riots were organized by BJP and Sangh Parivar for political dividends which worked in their favor then but now people have understood that violence like that only leads to destruction and does not benefit anyone. This will be taught to BJP as well by voters in forthcoming general elections,” she said. AIDWA presented a cheque to Azra Qureshi for her future education. 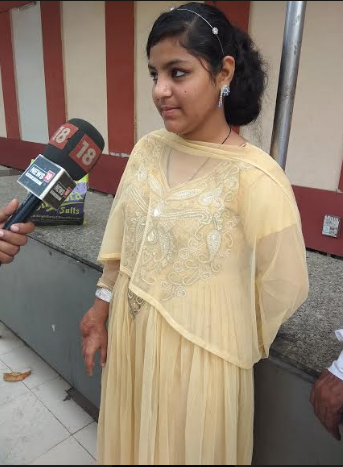