Friday marked what Gaza’s health ministry described as the single bloodiest day of the Great March of Return protests since 14 May, when Israeli occupation forces fatally injured more than 60 Palestinians.

Seven Palestinians, including two children, were slain on Friday, two days shy of the six-month anniversary of the protest launch.

The two children were identified as Nasir Azmi Musbah, 11, shot in the head east of Khan Younis, and Muhammad Nayif Yusif al-Hawm, 14, shot in the chest east of Bureij. 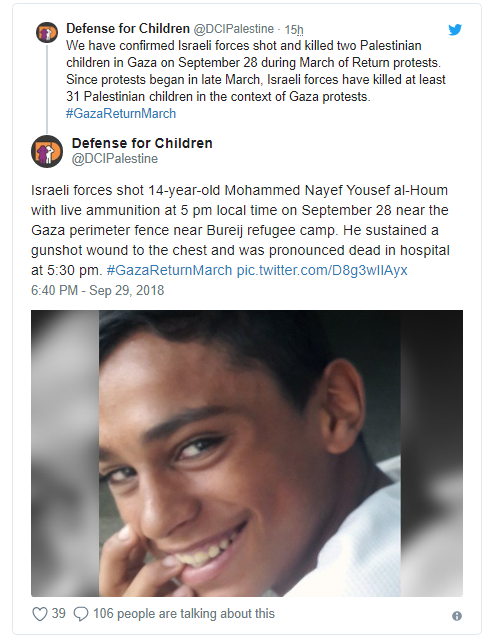 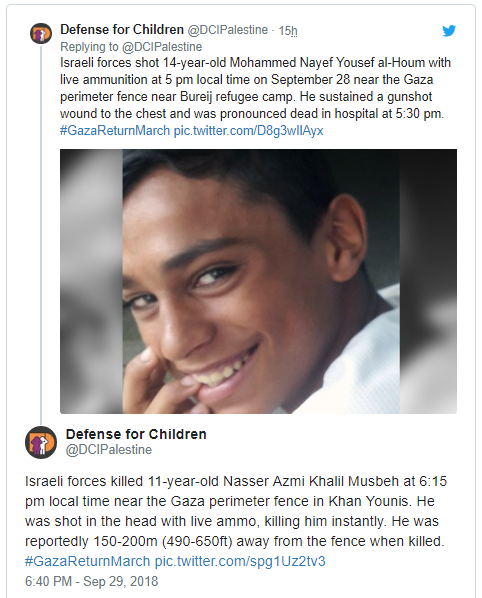 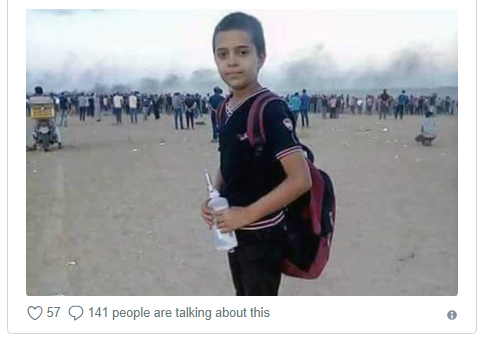 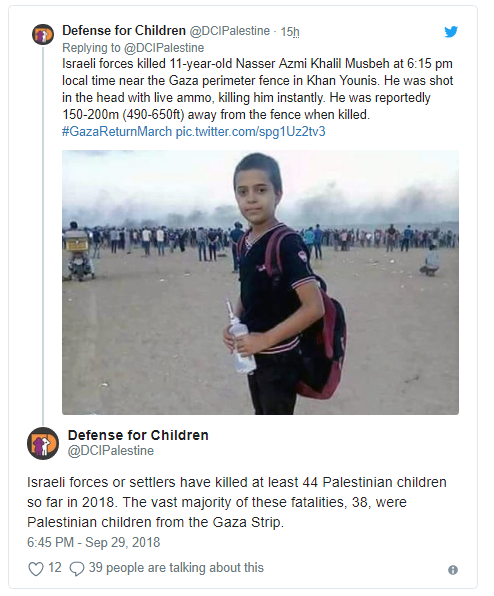 An adult was also killed in Bureij, in central Gaza: Muhammad Ashraf al-Awawdeh, 25, shot with a live bullet to the chest. And in southern Khan Younis, Muhammad Ali Muhammad Inshasi, 18, was shot in the stomach.

More than 250 Palestinians were injured during Friday’s protests, 163 of them by live fire, including 20 children, according to the Gaza-based human rights group Al Mezan.

One paramedic and four media workers were among those injured, including journalist Haneen Mahmoud Suleiman Baroud, 23, who was hit directly in the head with a tear gas canister, Al Mezan stated.

A graphic video published by Palestinian media outlets shows the moments after a man was shot in the back of his head during protests east of Gaza City on Friday:

The man was among a group including women and children waving flags near one of the fences along the Gaza-Israel boundary.

It was not immediately clear whether the injured man was among those who had died of their wounds.

Palestinian media also published a video said to show a paramedic mourning over the body of her brother, the slain child Nasir Azmi Misbah, in a hospital morgue:

Al Mezan blamed the “continued silence of the international community” for encouraging the continuation of the killings “without any fear of prosecution.”

These photos of 11-year-old Nasir Azmi Musbah were shared on social media following his death: 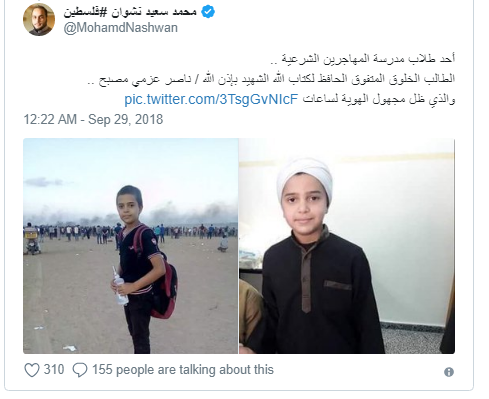 Israel’s use of deadly force against unarmed protesters on Friday is characteristic of its actions throughout the Great March of Return, during which more than 150 Palestinians have been killed, including 31 children, three persons with disabilities, three paramedics and two journalists.

More than 10,000 have been injured and required hospitalization, around half of them wounded by live fire. There have been 77 cases of injuries requiring amputation, among them 14 children and one woman. Twelve patients have been paralyzed due to spinal cord injury and two of them have died, a UN spokesperson stated Saturday.

In addition to those killed during protests, 52 other Palestinians in Gaza have been slain by Israeli occupation forces since 30 March and Israel is withholding the bodies of 10 of them.

Lethal fire against mass protests in Gaza is the subject of an ongoing investigation appointed by the United Nations Human Rights Council, which was told by human rights groups this week that there is no evidence that a single protester killed by Israel during the Great March of Return was armed.

Israel’s violence has also generated an unprecedented warning from the chief prosecutor of the International Criminal Court, who stated that Israeli leaders may face trial for the killings of unarmed demonstrators. 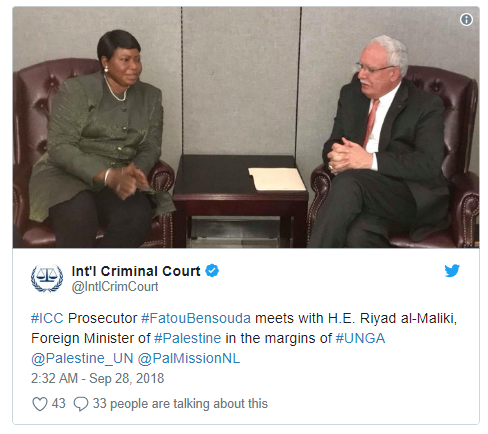 The World Bank stated this week that Gaza’s economy is “in free fall” after more than a decade of blockade, successive Israeli military assaults and internal division between Palestinian factions.

The Gaza economy shrank by six percent in the first quarter of this year, “with indications of further deterioration since then.”

“The result is an alarming situation with every second person living in poverty and the unemployment rate for its overwhelmingly young population at over 70 percent,” the World Bank added.

“The economic and social situation in Gaza has been declining for over a decade but has deteriorated exponentially in recent months and has reached a critical point,” Marina Wes, director for the West Bank and Gaza, stated.

“Increased frustration is feeding into the increased tensions which have already started spilling over into unrest and setting back the human development of the region’s large youth population.”

The UN’s Middle East envoy Nickolay Mladenov told the Security Council last week that “the power crisis in Gaza is coming to a head” as the last stocks of emergency fuel to operate critical health, water and sanitation facilities delivered to Gaza run out amid electricity shortages of around 20 hours per day.

Meanwhile the commissioner-general of UNRWA, the UN agency for Palestine refugees, said on Tuesday that the body has only enough funding to keep schools and clinics in operation through mid-October.

“We still need approximately $185 million to be able to ensure that all of our services, education system, health care, relief and social services and our emergency work in Syria and Gaza in particular can continue until the end of the year,” Pierre Krähenbühl added.

Two-thirds of Gaza’s population of two million are refugees from lands on the other side of the boundary with Israel. More than half of Gaza’s residents receive food aid packages from UNRWA, whose food aid budget will be exhausted by the end of the year.

The US announced last month that it would stop funding UNRWA after freezing $300 million in aid in January, throwing the agency into unprecedented financial crisis.

The US has also decided to cut $200 million more in bilateral aid to the West Bank and Gaza.

Meanwhile proceedings against the US were initiated at the International Court of Justice in The Hague on Friday over the relocation of its embassy from Tel Aviv to Jerusalem, which the Palestinian Authority in Ramallah says is a breach of the Vienna Convention. 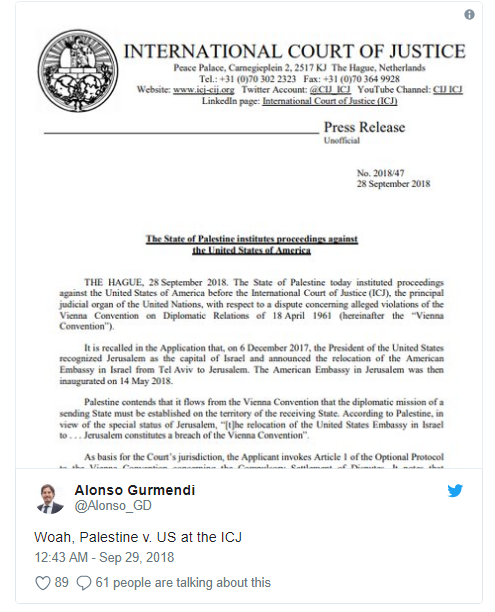 This story was updated to include statistics about injuries and to correct the number of children killed during Gaza protests since 30 March.