Israeli occupation forces killed 58 Palestinians in Gaza on Monday as tens of thousands protested along the eastern perimeter of the territory.

Monday’s death toll is likely to climb higher as 70 were in critical condition and Gaza hospitals struggled to triage the staggering number of casualties.

The health ministry reported nearly 2,800 injuries – almost half of them by live fire.

Held on the eve of Nakba Day – when Palestinians commemorate the ethnic cleansing of their homeland before, during and after the establishment of the state of Israel in May 1948 – the demonstrations may have been the biggest protest ever held in the territory. 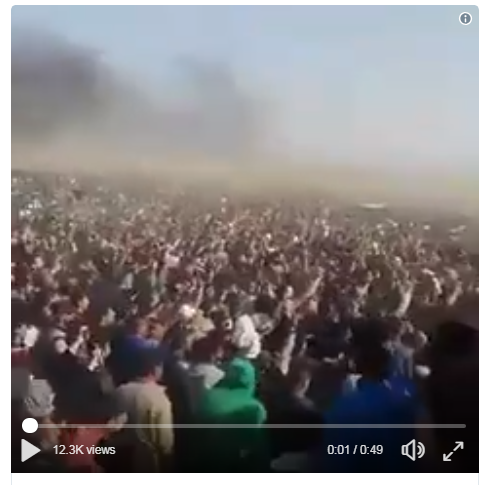 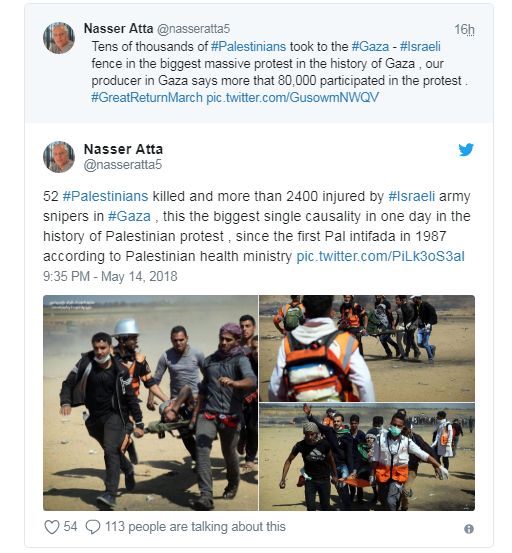 Protests are expected to continue on Tuesday.

Monday’s protests were held under the banner of the Great March of Return demonstrations, launched on 30 March, when Palestinians mark Land Day. The six-week protest was originally planned to culminate around Nakba Day.

Nearly 100 Palestinians, including 12 children, have been killed by Israeli forces during Great March of Return protests since 30 March.

While American officials and Israeli leaders celebrated the opening of the US embassy in Jerusalem – in violation of international law – occupation army snipers gunned down children, paramedics and journalists and its air force hit multiple sites across Gaza on Monday.

Five boys and a girl were among those slain. 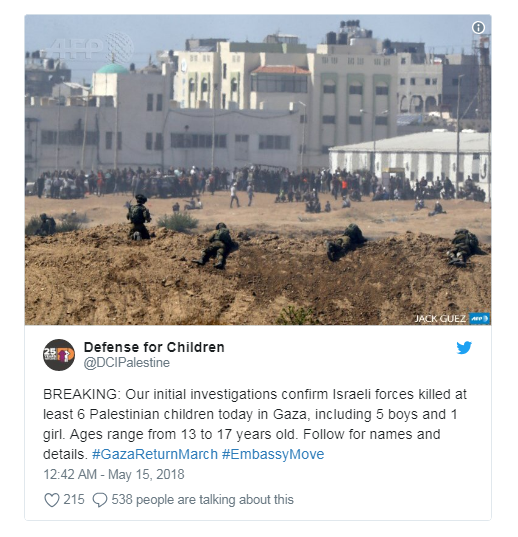 Additionally, the health ministry reported that an 8-month-old baby died as a result of gas inhalation.

The Palestinian human rights group Al Mezan reported that 42 of those killed were participating in peaceful protests when they were injured on Monday.

Paramedic Mousa Jaber Abu Hassanein was among those killed: 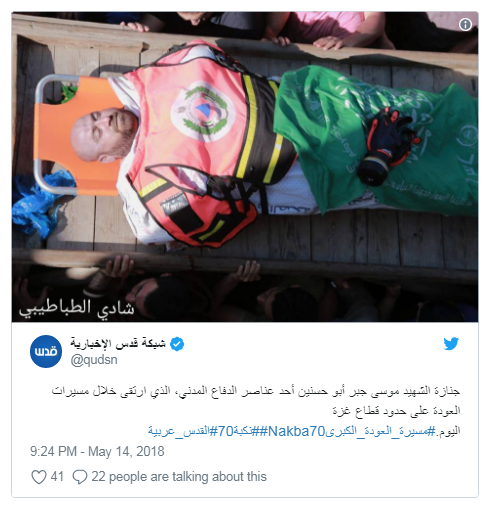 Fifteen Palestinians, including two children, were killed when Israeli forces fired artillery shells and opened fire at a crowd of civilians east of Jabaliya in the northern Gaza Strip, according to Al Mezan.

Israel claimed that its forces killed three militants attempting to place explosives near the Gaza-Israel boundary fence near the Rafah crossing with Egypt.

United Nations humanitarian coordinator Jamie McGoldrick stated that doctors at al-Shifa, Gaza’s largest hospital, “are overwhelmed, dealing with hundreds of cases of injured, including women and children. They are stretched to the limit and are running out of essential medical supplies.”

He added that “Particularly worrying is that public hospitals in Gaza have less than a week of fuel reserves to continue their operations.” 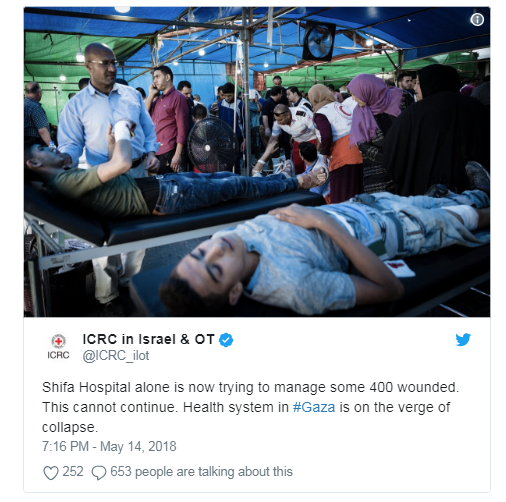 Gaza’s health ministry put out an urgent call for blood donations to save the lives of those wounded.

On Monday, the Israeli military reported its first injury since the Great March of Return protests began. A soldier was lightly wounded and taken to hospital for treatment, the first Israeli casualty resulting from the protests, according to the United Nations Office for the Coordination of Humanitarian Affairs.

Israeli forces have injured nearly 13,000 Palestinians during the Great March of Return protests, and some 6,800 injuries have required hospitalization, more than half of them caused by live ammunition.

Jason Cone, the US director of Doctors Without Borders, stated on Friday that “Even though there is not a war in Gaza, the injuries sustained by our patients are terribly similar to what we see in conflict zones,” with fist-size exit wounds and “bone … pulverized into dust.”

Gaza’s health ministry has called on Egypt to provide its hospitals with drugs and emergency medical supplies and to allow for the transfer of patients requiring specialized treatment unavailable in the Strip.

Gaza-based writer and scholar Refaat Alareer, who was present at Monday’s protests, told The Electronic Intifada Podcast that “every single minute, you would hear a shot here or there, and then someone would fall down.” 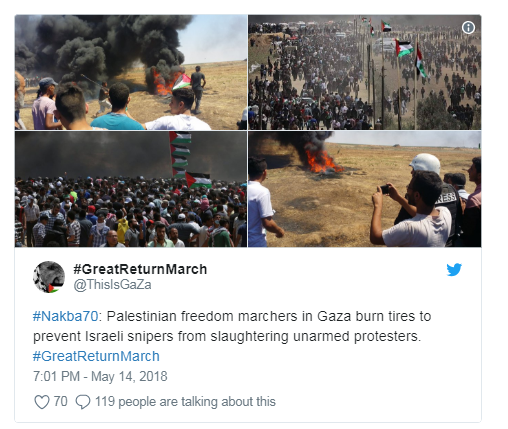 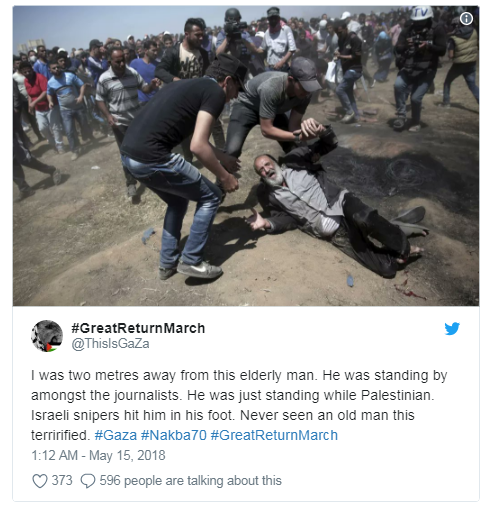 Ten journalists were injured on Monday in what Al Mezan observed was an escalation of the Israeli military’s targeted attacks on members of the press covering the Great March of Return protests.

Photojournalist Yasir Qudih, whose work has frequently appeared on The Electronic Intifada, was critically injured. Qudih had taken an iconic photo of a protester using a table tennis paddle to hit back a gas canister during a demonstration earlier in the month: 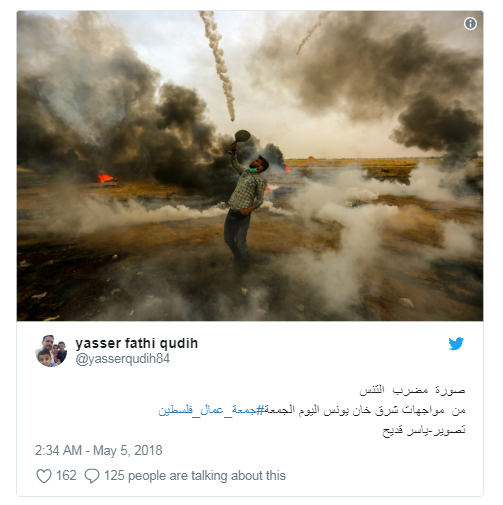 Another journalist, Motasem Dalloul, was reportedly fighting for his life after being shot by the Israeli army while covering the protests on Friday. 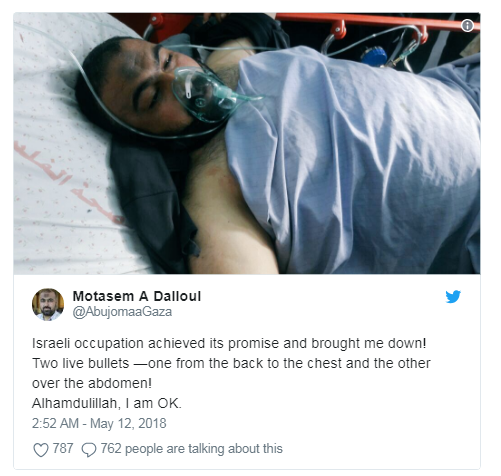 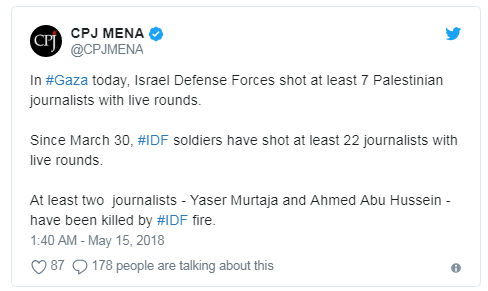 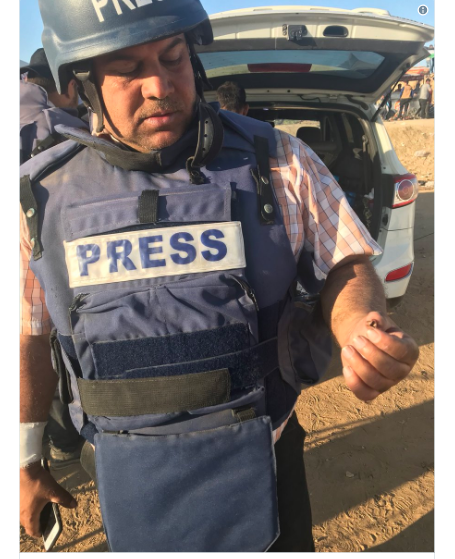 The UN High Commissioner for Human Rights condemned the “shocking killing of dozens” in Gaza, calling for “those responsible for outrageous human rights violations” to be held to account. 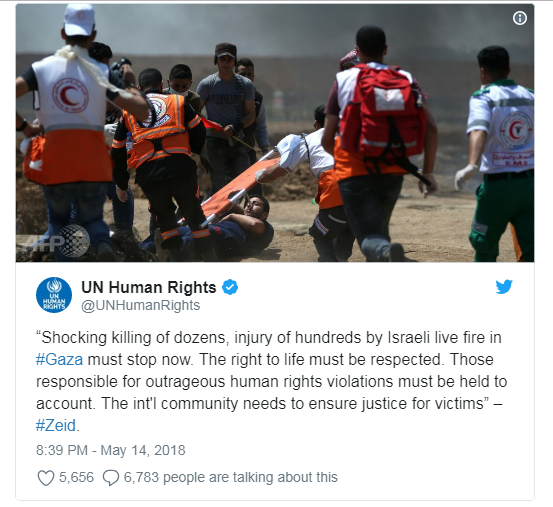 The dissonant images of US and Israeli officials celebrating the opening of the Jerusalem embassy and of Palestinians being subjected to brutal violence in Gaza drew the scorn of many on social media. 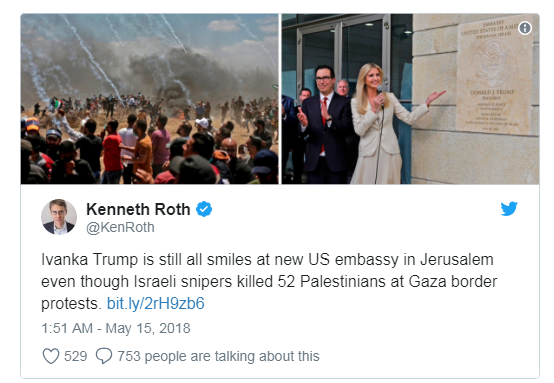 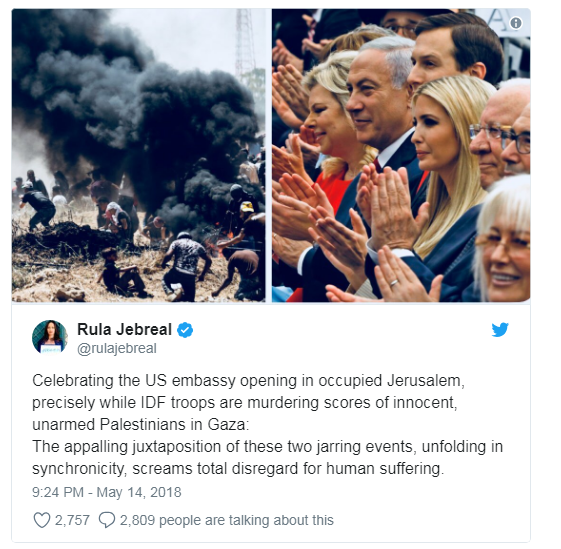 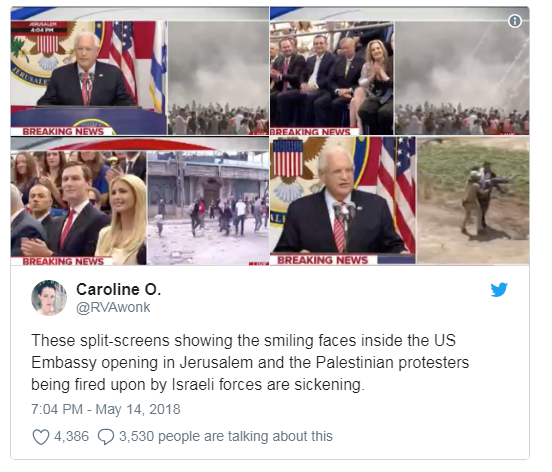 Washington blamed Palestinians for their own deaths while President Donald Trump, whose daughter and son-in-law presided over the Jerusalem embassy opening, congratulated Israel on what he called its “big day.”

“The responsibility for these tragic deaths rests squarely with Hamas,” deputy White House press secretary Raj Shah stated during a press briefing on Monday. “Hamas is intentionally and cynically provoking this response and … Israel has the right to defend itself.” 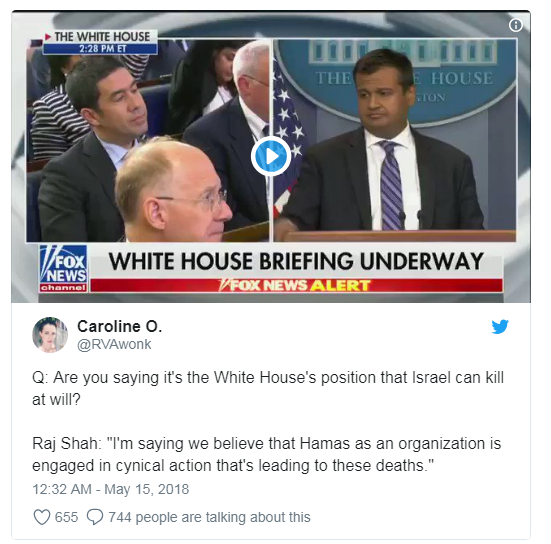 The White House statement echoed Israeli government talking points, with Prime Minister Benjamin Netanyahu insisting on Monday that “Hamas clearly says its intentions are to destroy Israel and sends thousands to break through the border for that end. We will continue to act with resolve to defend our sovereignty and our citizens.”

Israel’s public security minister Gilad Erdan – whose portfolio includes sabotaging the global boycott, divestment and sanctions movement in support of Palestinian rights – blamed Hamas’ leadership and what he called its “cynical and malicious use of bloodshed.”

He downplayed the mounting Gaza protest death toll, stating that it “doesn’t indicate anything – just as the number of Nazis who died in the world war doesn’t make Nazism something you can explain or understand,” according to Haaretz.

The European Union meanwhile drew false parity between unarmed civilians protesting in Gaza and the heavily armed forces maintaining an 11-year blockade and half-century-long military occupation of the territory: 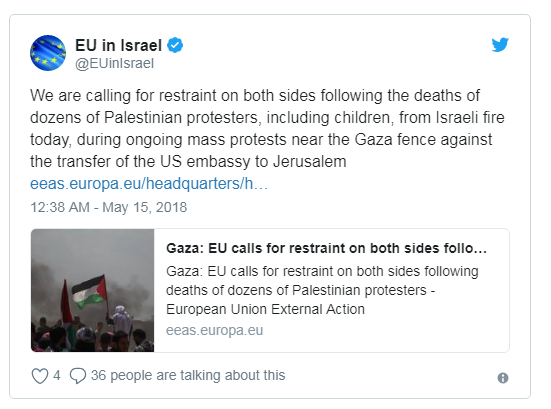 South Africa, by contrast, withdrew its ambassador from Israel, condemning “in the strongest terms possible” the violence against Palestinians in Gaza.

Turkey withdrew its envoys from both Israel and the US in protest of the move of the US embassy from Tel Aviv to Jerusalem. 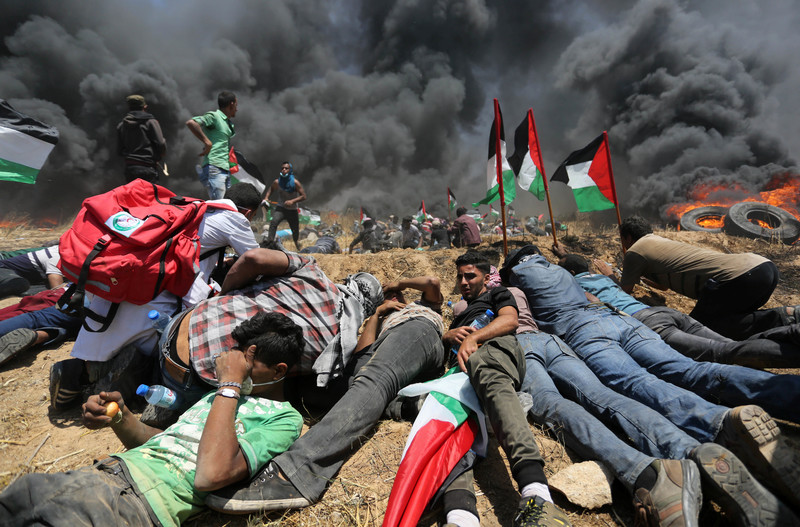 Four Palestinian human rights groups on Monday called on the UN Security Council to convene an emergency session to address Israel’s violence in Gaza and demand that Israel immediately lift its closure and blockade.

The groups called on the Security Council to “Implement all options to protect Palestinian civilians” and establish an independent and impartial investigation into Israel’s use of lethal force against Great March of Return protesters.

The Israeli rights group B’Tselem stated that “The fact that live gunfire is once again the sole measure that the Israeli military is using in the field evinces appalling indifference towards human life on the part of senior Israeli government and military officials.”

B’Tselem reiterated its call on soldiers to “refuse to comply with these manifestly unlawful open-fire orders.”

According to Israeli media, soldiers are ordered “to prevent demonstrators from crossing into Israel at any price, including use of live fire.”

If any Palestinians do manage to cross the boundary, Haaretz reported, “the orders are to shoot directly at them with intent to hit, to prevent them from getting into these communities.”

Sarah Leah Whitson of Human Rights Watch stated that Israel’s open fire policies “resulted in a bloodbath that anyone could have foreseen.” 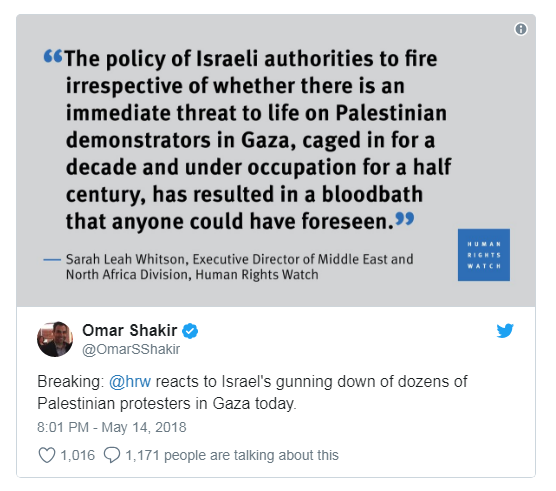 On Monday morning the military dropped leaflets on Gaza warning Palestinians that they risked death by participating in the protests.

Al Mezan reported that the military had flattened sand dunes built up by demonstrators to provide cover from Israeli fire, “indicating an assumed intention on the part of the military to improve visibility for the purpose of targeting protesters.”

Two-thirds of Gaza’s population of two million Palestinians are refugees from the lands on which the state of Israel was declared in 1948. Israel has long prevented Palestinian refugees from returning to their lands and homes because they are not Jewish. 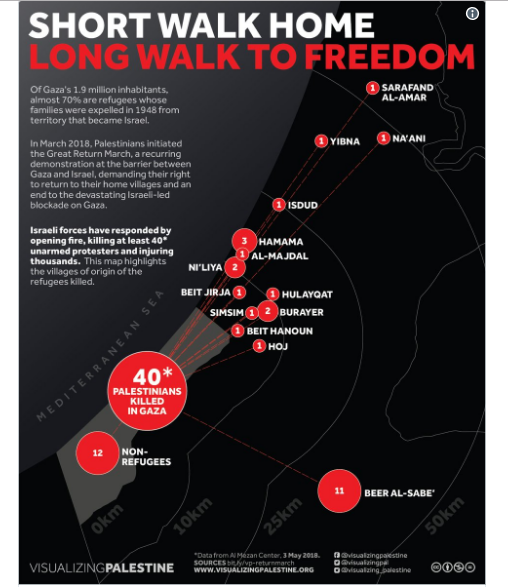 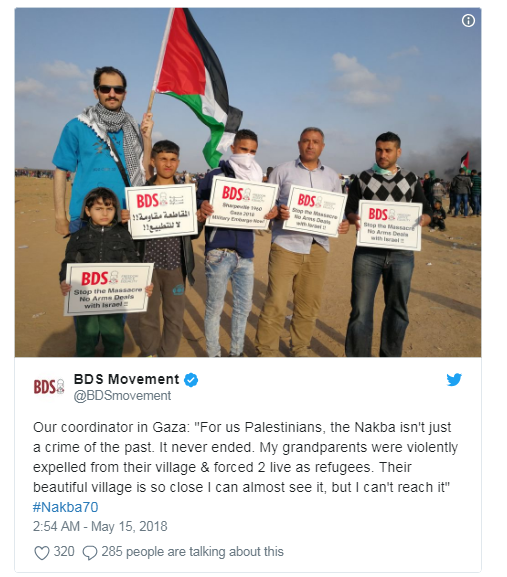 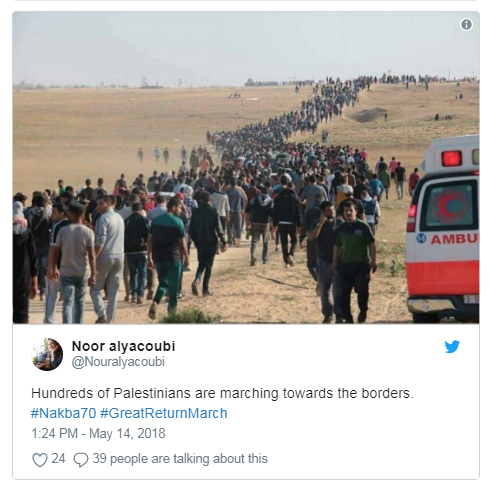 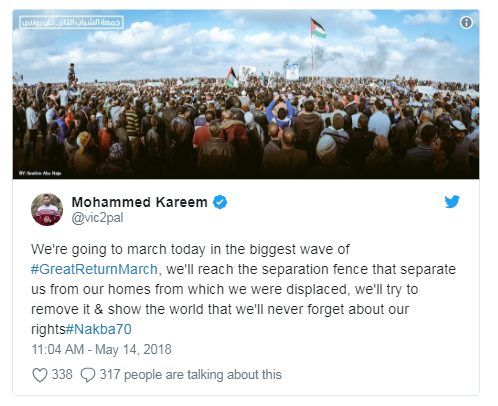