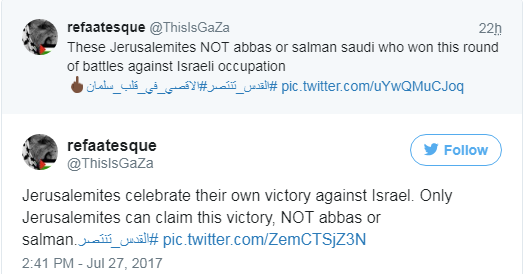 But the rare scenes of Palestinian jubilation in Jerusalem were soon met with Israeli violence.

Just an hour after the gates to al-Aqsa were opened, Israeli forces injured dozens of worshippers with stun grenades, tear gas and rubber-coated steel bullets: 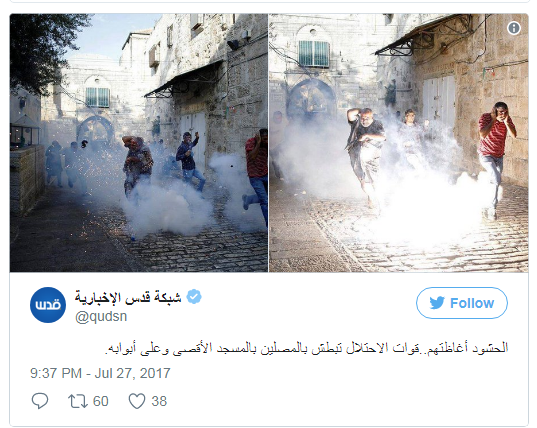 Israeli soldiers were shown on video beating a detained youth with batons: 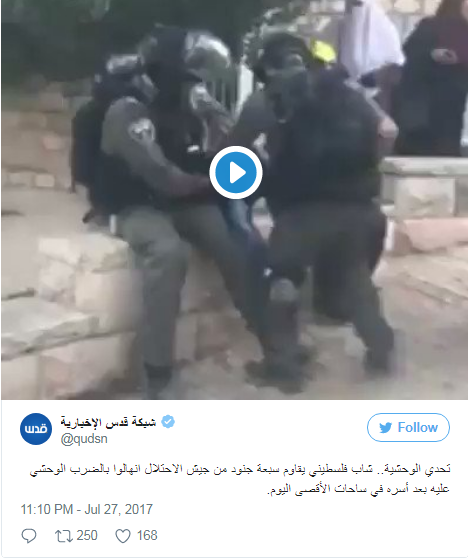 Heavily armed Israeli soldiers occupied the roof of al-Aqsa mosque and removed Palestinian flags that had been raised there: 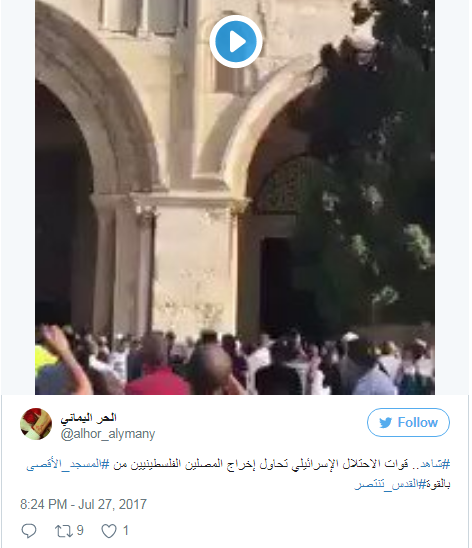 They were also deployed in front of the Dome of the Rock: 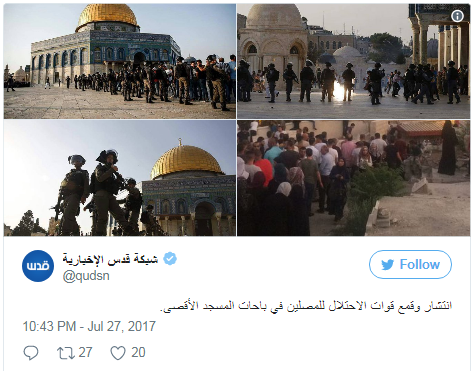 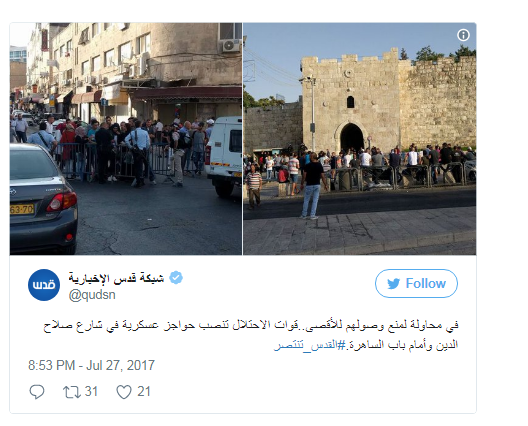 Journalists present reported that stun grenades were fired inside al-Aqsa mosque while worshippers were crowded there: 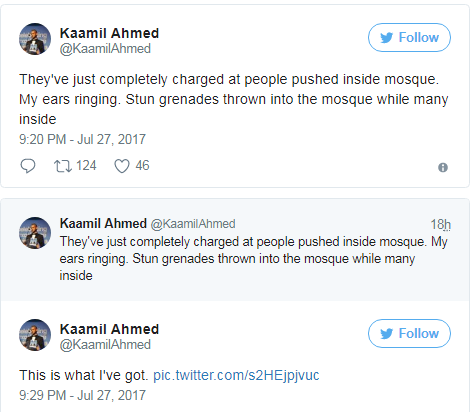 Israeli police spokesperson Micky Rosenfeld stated that stones were thrown at police units and towards the Western Wall plaza after thousands entered the compound on Thursday afternoon.

But witnesses said Israeli forces attacked them without provocation. They told Al Jazeera on Thursday that Israeli forces were angered when they saw people carrying sweets – which they planned to distribute in celebration of the reopening of the mosque.

Al-Aqsa, one of the most holy sites for Muslims and a touchstone of Palestinian identity, has been the center of widespread protest over the past two weeks, both in Palestine and abroad.

The mosque compound was closed for three days after a shooting attack that left two police officers and three alleged Palestinian assailants dead on 14 July.

Worshippers boycotted prayer at the site in protest of Israel’s unilateral installation of metal detectors and security cameras.

The last of those installations was removed by Israel overnight after mass protest in the streets of Jerusalem and international pressure.

Palestinian factions had called for a day of protest on Friday.

Five Palestinians have been killed during protests in the Jerusalem area since last Friday. Three Israelis were fatally stabbed in a settlement late last Friday night.

On Thursday, Benjamin Netanyahu, Israel’s prime minister, called for the Palestinian assailant, who was shot but not killed during the settlement stabbing incident, to be executed.

The Islamic Waqf religious trust called for the closure of mosques across Jerusalem on Friday and for worshippers to assemble at al-Aqsa.

Israel’s police commander in Jerusalem warned of mass violence against worshippers on Friday.

Yoram Halevy told media on Thursday: “If there are people who try tomorrow to disturb the peace, to harm police or citizens, they should not be surprised: There will be casualties and people injured.”

Israeli leaders appear to be trying to save face after mass celebrations erupted in Jerusalem Wednesday night while police removed the newly installed security cameras: 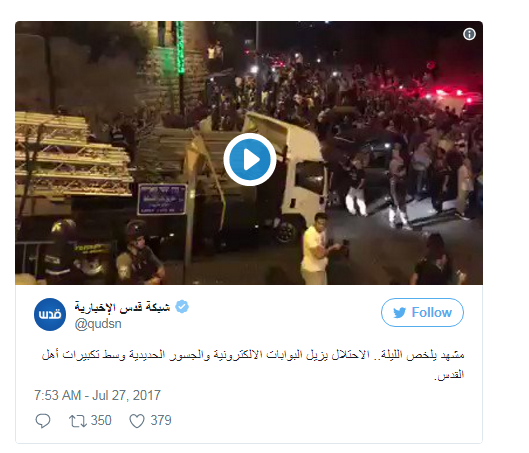 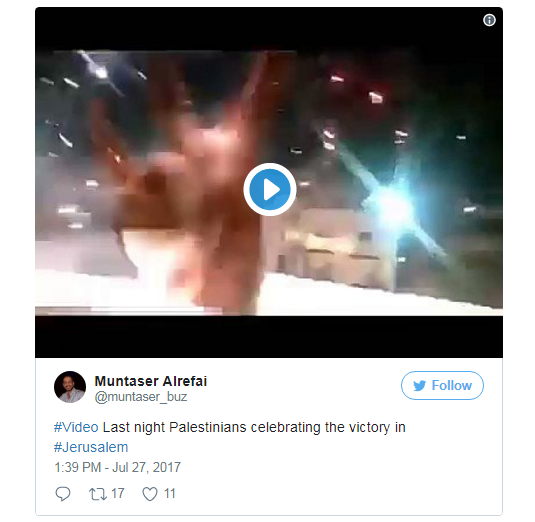 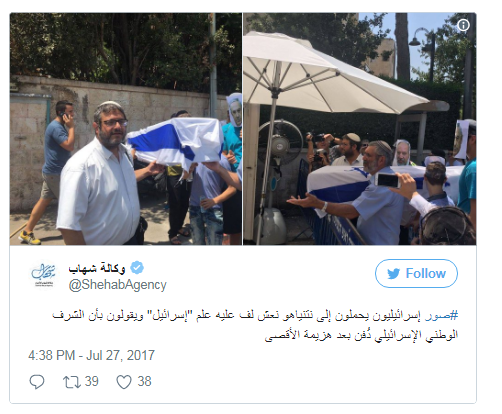 Also on Wednesday night, a massive crowd gathered in Umm al-Fahm, a Palestinian town in Israel, for the burial of the three Palestinians slain during the course of the 14 July deadly ambush on police outside al-Aqsa: 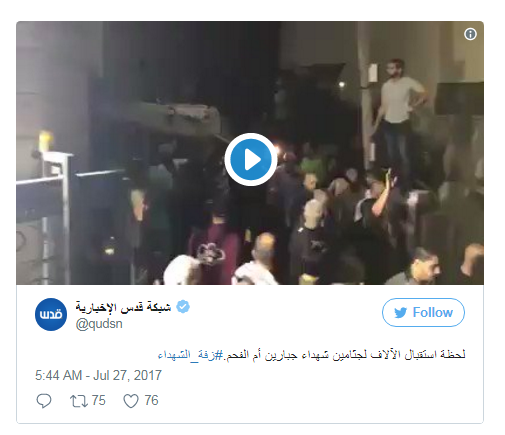 The suspected attackers’ bodies were transferred after a precedent-setting decision by Israel’s high court ordering police to hand over the men’s remains to their families.

Israel has withheld the bodies of Palestinians killed during the course of alleged attacks as a means of collective punishment and to deter mass protests at their funerals.

In addition to closing al-Aqsa for Friday prayers for the first time in decades, Israel imposed a massive crackdown following the 14 July attack.

More than 160 Palestinians were arrested in Jerusalem alone, including around 30 children, according to the Palestinian prisoner advocacy group Addameer.

Fifteen Palestinian political leaders in Jerusalem were arrested on 20 July and released on condition that they don’t enter al-Aqsa mosque, engage in speeches or demonstrations or give media interviews, according to Addameer.

The Israeli prime minister blamed Al Jazeera for inciting violence over al-Aqsa. The broadcaster had published a video showing Israeli police kicking a Palestinian kneeling in prayer on a Jerusalem street last Friday.

It also broadcast live from al-Aqsa on Thursday as Israeli forces attacked worshippers.

“Prime Minister Netanyahu’s threats to close Al Jazeera’s Jerusalem office or to rewrite the law to allow the broadcaster to be expelled smack of authoritarianism and are wholly inconsistent with the democratic image Israel wishes to project abroad,” Sherif Mansour, Middle East and North Africa Program Coordinator for the Committee to Protect Journalists, stated on Thursday.

“Netanyahu should stop threatening the media and should respect all journalists’ right to do their jobs without fear of retaliation.”