ELECTRONIC INTIFADA: Israeli forces killed a prominent Palestinian activist during a raid on a home in the town of al-Bireh, near the city of Ramallah, the seat of the Palestinian Authority in the occupied West Bank, on Monday.

“The martyr Basil al-Araj was a freedom fighter, intellectual and theorist of the uprising of Palestinian youth. He was dedicated to a path of resistance, intifada, unity, return and liberation of the entire land of Palestine,” the Popular Front for the Liberation of Palestine stated following the slaying.

No Israeli soldiers were injured. Two Palestinians were wounded during confrontations with Israeli forces following the raid.

An Israeli police spokesperson called al-Araj the leader of a cell “planning terror attacks against Israelis.” The Israeli army said that two M-16 guns and an improvised Carlo rifle were found in the home.

Israeli police released footage of the raid showing soldiers opening fire while searching the home. The video does not show al-Araj.

Mustafa Barghouti, a medical doctor and leader of the Palestinian National Initiative party, cast doubt on Israel’s claims of a firefight, telling media, “If al-Araj had any chance to shoot, he would not have been able to shoot more than one bullet. The house was completely bombarded with Israeli bullets.”

A journalist with the al-Ghad television network found no evidence that al-Araj had fired at the soldiers, only evidence that the Israeli forces had opened fire on al-Araj. Al-Ghad’s video of the apartment in which al-Araj was killed shows that the walls and ceiling were sprayed with bullets and al-Araj’s belongings ransacked.

Witnesses told media that they saw al-Araj being dragged from the home. His body is being held by Israel.

Al-Araj was killed in a zone of the West Bank supposedly under Palestinian Authority control.

“Usually the Israeli army claim that they inform [the Palestinian Authority] before entering the area, but they came into the center of Ramallah, which shows that they have full military control there,” Barghouti told Al Jazeera.

The slaying of al-Araj was “nothing but an act of extrajudicial killing and assassination,” Barghouti added.

Israeli forces had been attempting to apprehend al-Araj after his release by the Palestinian Authority, who had held him for five months without charge or trial, in September last year. Al-Araj was said to be held in isolation in a cell measuring 1 meter by 1.5 meters.

He and five other Palestinians were freed by the PA after going on hunger strike; four of them were subsequently arrested by Israel.

The home of al-Araj’s parents in the village of al-Walaja, near the West Bank city of Bethlehem, was repeatedly raided by Israeli forces during the past week, Palestinian media reported.

Samidoun, a Palestinian prisoners support network, has reported ongoing raids on al-Araj’s family home, with his relatives being summoned for questioning by Israeli authorities in order to put pressure on al-Araj to turn himself in.

The killing of al-Araj reverberated widely in Palestinian society, with political parties calling for the end of Palestinian Authority “security coordination” with Israel.

Just two weeks after al-Araj’s arrest in April last year, Palestinian Authority leader Mahmoud Abbas boasted to the German publication Der Spiegel that “Our security forces are working very efficiently to prevent terror. Just a couple of days ago, three young men were tracked down and arrested. They were planning an attack. In this context, our security cooperation with Israel is functioning well.”

Samidoun’s international coordinator Charlotte Kates told The Electronic Intifada at the time that it was most likely that Abbas was referring to al-Araj and the two other left-wing activists who were arrested with him.

The Palestinian prisoner rights group Addameer stated that al-Araj and four others held with him by the Palestinian Authority were beaten and subjected to stress positions and sleep deprivation, as well as other forms of ill-treatment. 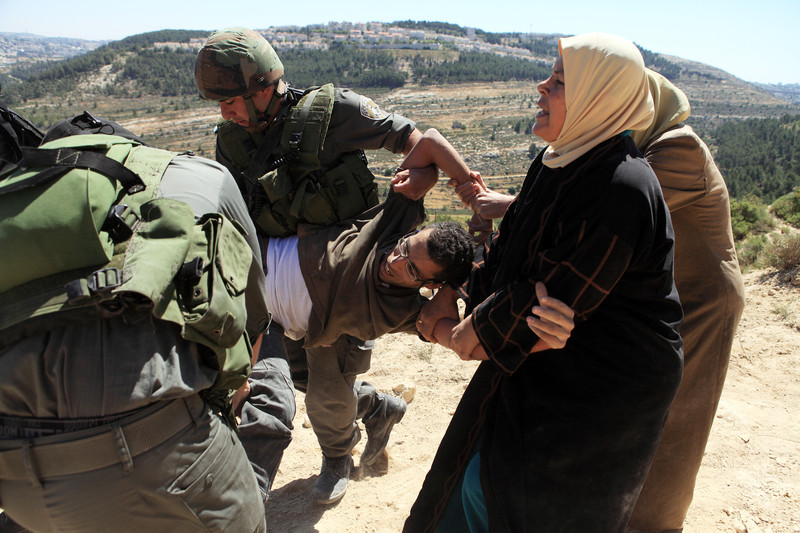 (Palestinian women attempt to prevent Israeli soldiers from arrest Basil al-Araj during a direct action protest against the construction of Israel’s wall in al-Walaja village in April 2010. Anne PaqActiveStills)

Basil al-Araj “was a revolutionary intellectual who put all of his cultural and intellectual energies in the service of the resistance together with his own actions on the ground, confronting security coordination and collaboration,” the Popular Front for the Liberation of Palestine added in its statement on Monday.

Al-Araj was a trained pharmacist and had been active in multiple popular movements in Palestine, as well as a supporter of boycott, divestment and sanctions against Israel. He was part of the 2012 protest against a visit by Israel’s minister of defense to Ramallah in 2012, which was violently repressed by Palestinian Authority security forces.

Al-Araj wrote articles and gave educational tours on the Zionist colonization of Palestine and the resistance against it.

Palestinians protested in multiple cities and refugee camps – including in Lebanon – on Monday night.

In the town of al-Bireh, where al-Araj was killed, protesters called for an end to Palestinian Authority security coordination with Israel:

In the city of Ramallah, one town over from al-Bireh, protesters chanted against Palestinian security forces:

(Cover Photograph:n November 2011, Basil al-Araj was among a group of Palestinian activists from the West Bank who boarded an Israeli bus to Jerusalem in an attempt to highlight Israel’s regime of movement restrictions. The bus was stopped at a checkpoint, where all the activists were arrested and forcibly removed.Oren ZivActiveStills)