The Sobering Reality Behind the Lure of ‘Maldives’ in Lakshadweep

The belief in Indian exceptionalism is predicated on its ‘manifest destiny’ to think big, plan big and achieve big. One visionary statesman who personified that patriotic fervour was Atal Bihari Vajpayee, who cautioned simultaneously, ‘Our words, actions, and diplomatic efforts should be aimed at trying to achieve pragmatic goals rather than creating rhetorical effect’.

Vajpayee was rooted in the Indian civilisational reality and he insisted plainly, ‘if we must wage war, we have to do it on employment, disease, poverty and backwardness’, and in what may seem unbelievable in today’s context, the colossus who single-handedly formed a party and won the imagination of the masses for his dignified inclusivity said, ‘For the Bharatiya Janata Party, Gandhian socialism is what we want to achieve and make society free of exploitation and full of opportunities’.

Indeed the Indian elephant moved slowly, wisely but surely (not like the fabled Chinese Dragon, who instinctively burnt anything that came in its way, including its own) – all major global indices of socio-economic parameters, freedom of speech, press and liberality progressed steadily after the economic revolution of the early 90’s, be it in the years of Narasimha Rao, Atal Bihari Vajpayee or Manmohan Singh.

Many years down the line, facts speak one story, and yet for some, belief overrides facts.

While a Vajpayee had prophetically prioritised ‘employment, disease, poverty and backwardness’, twenty years back – today those hauntingly exact concerns are staring back, hard. But perhaps Vajpayee’s forewarnings and priorities were considered too passé, too unambitious, and even tad bit Nehruvian in the face of more dazzling projects like creating ‘Singapores’ in our midst!

One such misplaced bravado that is playing our currently is the supposed plan to develop Lakshadweep ‘like Maldives’, as a justification ostensibly to allay the concerns of hapless natives who are fighting two battles simultaneously.

First, administrative bungling that led to a Covid outbreak (till Jan 2021, Lakshadweep was the only unaffected place in the country and today it is swamped with 7500 odd cases); and secondly, an alien ‘cultural project’ to the consternation of the unconsulted, unconsented and unhappy locals.

The official defense for the unwanted changes is ‘the welfare of local residents and Lakshadweep’s development. We want to develop Lakshadweep like Maldives’ and added for good measure, keeping in times with the spirit of the promises that be, ‘if not better’!

The issue is not in aspiring for ‘Maldives’, bullet trains or new Central Vista Projects – but one of priorities, given that the sovereign resources are finite, and promises are infinite. Priorities further nuanced by topical urgencies, as in the reasonable expectation that the primary focus ought to be on pandemic management rather than provoking dissonance, when society is already wounded, beyond imagination.

Even more importantly, do we need to really replicate a ‘Maldives’ as an inspirational lodestar for tourism in Lakshadweep or is the neighbouring Kerala (‘God’s Own Country’) a more inclusive, equitable and judicious model, or even the very successful ‘Visit Gujarat’ campaign for driving traffic and attracting investments?

Were proposals for beef ban (unapplicable in neighbouring Kerala and many other states) for a populace of at least 93% of Muslim faith, or the bringing in anti-Goonda provisions (which can realistically be misused to curb dissenting voices), in amongst the most crime-free places in the country, justified?

Did the hugely successful ‘Visit Gujarat’ campaign necessitate lifting the liquor ban for promoting tourism, as is being suggested as necessary to drive tourism in Lakshadweep?

The value of societal distraction via polarisation is pure political gold. Lakshadweep, nature’s idyll, has been compelled to wake up to a flurry of ‘reforms’ that it did not ask for and which have the potential to stir an unnecessary ‘divide’ during a debilitating pandemic.

The familiar pattern of ‘friendly’ social media creatively abuzz by contextualising and conflating the Lakshadweep unrest with threats from China, drugs, gun-running plays a not-so-subtle role of casting aspersions on the locals, predominantly from a minority community.

What emerges lazily and falsely is the ostensible intransigence of the locals towards development, security concerns and national integration – a hugely unfair attribution imposed on a population of just around 75,000 who do not have the matching capability or resources to clarify their concerns on media or other social platforms.

Suppression through innuendoes, vilification and past incidents to somehow connect the dots and justify a potential ‘Maldives’ is in the making.

As it is, the utopia of Maldives is rife with byzantine intrigues belying the hypocrisy and dichotomy of a popular image as a luxury holiday destination, emerald waters and scuba divers, as it is also given to extreme societal inequities, religious intolerance, political autocracies, corruption and violence that hardly make it model, worth emulating.

Much like the fears expressed by the locals of Lakshadweep about provisions pertaining to land acquisition for ‘planning areas’ – Maldives is a prime example of exploitation and deprivileging of most, by a select few.

More than 300 out of the total 970 uninhabited Islands are believed to have been leased out to tourism, disrupting the traditional food security for locals, access, cultural and social rights – apparently, nearly 60% of resort employment is to foreigners, with minimal white-collar presence for locals.

The elite biggies in Male or abroad have statistically enhanced the national GDP figures, whereas the large mass of locals is kept out of the visible ‘progress’ and ‘development’ facade. Bereft of inclusion in the ‘booming’ tourism industry, the denial of traditional fishing rights in and around the leased islands and lagoons has only disempowered Island communities, and the decisions pertaining to the precious and threatened natural resources are controlled by a few who are raking the benefits of ‘development’.

Even before the pandemic, as per the Inclusive Development Index (IDI) by the World Economic Forum (WEF), India had ranked a dismal 62 out of 74 emerging nations and was rated amongst the least inclusive countries in G-20. This disconcerting status is a result of decades of sub-optimal planning and implementation, therefore impeding the rate of development and progress.

Later, more audacious and bold political promises of economic resurgence, societal harmony and impregnable security were posited to the masses and they reposed faith enthusiastically - the ‘Maldives’ analogy, is from the same playbook of razzmatazz.

But, be it Lakshadweep or the ‘rest of the country’, it would be worthwhile to reread, reiterate and internalize the far-sighted sagacity of Atal Bihari Vajpayee’s developmental priorities on, ‘employment, disease, poverty and backwardness’, even if it doesn’t sound, half as exotic or dazzling, as say, Maldives!

Note: Significantly just a day ago Union Home Minister, in the face of increasing protests, has assured a delegation of BJP leaders from Lakshadweep that no changes will be made without taking the people into confidence. 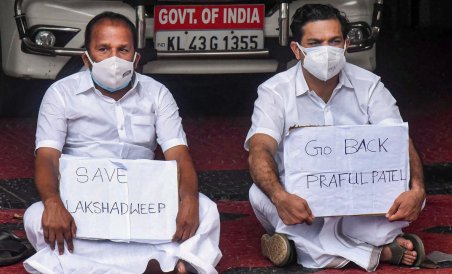