A General Bats For AFSPA: What About Human Rights for the Army?

Utter callousness of the government

Indian Army's primary role is to preserve national interests and safeguard the sovereignty, territorial integrity and unity of India against any external threats by deterrence or by waging war.

An important secondary role under the rubric of “Aid to Civil Authorities” is “Assistance in the Maintenance of Law and Order”. Under Paragraph 305 of the "Regulations for the Army" for deployment of troops on duties in aid of civil authorities, the strength and composition of the force; the amount of ammunition to be taken; and the manner of carrying out the tasks are matters for the decision of the military authorities alone." Paragraph 306 (d) further provides immunity to all ranks of the army if they ‘act in good faith’ which means "with due care, diligence and attention".

Recently, the Army’s visibility on duties relating to counter-insurgency (CI) operations in J&K and at some places in the North East has increased. In both areas, it is accomplishing its tasks with determination, efficiency and élan. However, it is sad indeed that the support from the government and the judiciary, as well as their own hierarchy, is lacking because of dilution of laws relating to safeguarding the army personnel carrying out CI Operations. Such dilution appears to be illegal and ‘bad in law’.

On account of the high intensity and peculiar nature of CI Operations and the fact that the army, unlike the police, does not have police powers, such as for arrest and search, the Armed Forces Special Powers Act (AFSPA) had to be specially enacted for smooth functioning in such operations by the army.

AFSPA came into force only in those areas that were declared “Disturbed” by the civil authority (Central or State Government). In addition, all superior officers in the chain of command, from the Apex to the tactical levels have issued comprehensive instructions for ensuring that actions of army personnel do not contravene human rights in any manner and no or minimum collateral damage occurs. Such instructions are even carried by all ranks in their pockets, as constant reminders. The rationale is that since such operations are being conducted within the country, against misguided countrymen who have taken to arms to settle their grievances, they are not enemies and hence should be brought round by firmness wherever possible and collateral damage during operations must be minimal. Even if the insurgents are those that have been infiltrated from across the border by our hostile neighbour and are thoroughly brain-washed are to be given warnings to surrender, before action is taken to neutralise them.

It would thus be clear that adequate legal provisions exist, as also detailed orders to army personnel, for ensuring that all ranks carry out assigned tasks in a fair manner, guided by the doctrine of ‘Good Faith’. That is precisely what the young officers and soldiers are doing at the business end of operations. Unfortunately, the scenario has been drastically changed for political reasons. The then Chief Minister of J&K had cajoled a ‘rooky’ Defence Minister to give the local police a carte blanch to register cases against troops if an insurgent is killed in an encounter or in other operational circumstances! This is grievously unfair and an illegal order since AFSPA is in force. Yet, the highest court in the land has endorsed it. Strange indeed!

Deployment of the army on CI tasks is meant to be temporary. When law and order is restored and political leaders and administrative officials resume their work, the army must return to the barracks. Unfortunately, in practice, once the army is committed in CI Operations, the civil authorities are loath to release the army on account of various reasons. These include lack of well trained and well lead Central Armed Police Forces (CAPF’s); poorly trained armed police battalions of the concerned states; and the lack of confidence among the civil officials to carry out their tasks. Another reason is that since the bulk of local population has faith in the fair play of the army, as opposed to other forces, they want the army to stay!

One was stunned to read last week that as many as 356 Army Serving Personnel had petitioned the Supreme Court en-masse requesting it to annul the dilution of the AFSPA provisions and restore status quo ante. Their highly legitimate petition has pointed out the dangerous adverse effect it was having on both the morale and well-being of personnel deployed on CI tasks, but also on the future conduct of such operations, not only in J&K but also in other states.

Our army has stood resolutely against all types of enemies, in wars, battles, skirmishes and CI Operations since Independence in 1947. It has also been completely a-political and loyal, but it is also sensitive to the smallest slight to its honour, dignity and military independence, not to mention the nation's sovereignty; and it is steeped in loyalty to constitutional principles.

One is therefore bewildered to see the utter callousness of the government, who are apparently bent on sacrificing them, for political gains camouflaged under the cloak of Human Rights. The army hierarchy also needs to be chided for acquiescing to the political leaders, knowing well the adverse repercussions To put the record straight, the Human Rights record of our officers and men engaged in CI Operations is commendable. Every incident reported is investigated meticulously and any one found guilty of committing an offence is punished.

There is need to reflect on the repercussions that will result, if this state of affairs continues. The army and the nation should not be placed in such a position as is shown below in this textual photograph that is doing the rounds in the social media: 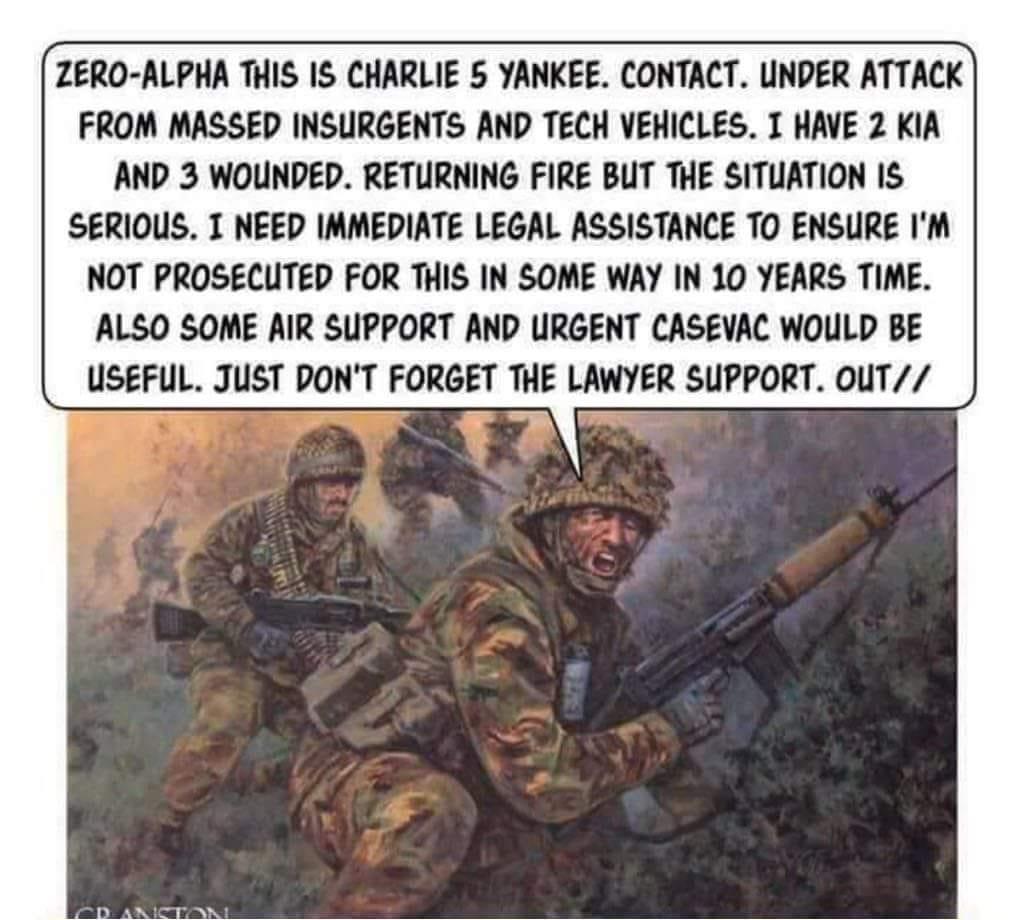 The Army has been deployed in J&K since the state machinery became incapable of handling the law and order situation. But the irony is that the very administration which the Army seeks to assist and support has failed to safeguard the human rights of the armed forces personnel.

Personnel of armed forces, facing grave and serious violations of human rights, also deserve the attention and empathy of the custodians of human rights. Why has this not been done? These aspects also form part of the petition before the Supreme Court that has been made by the 356 serving personnel of all ranks.

It is strange that on one hand, the Army is expected to curb unlawful and disruptive activities by trouble-makers and on the other they do not come under the purview of human rights but are expected to face attacks on them without retaliating, because the law to safeguard has been diluted due to political or other extraneous reasons.

It is matter of national shame that in the 72nd year of our Independence, serving army personnel have to approach the highest court in the nation for their legal protection while conducting military operations in most difficult areas and circumstances, amidst a hostile anti national population.

It is reiterated that the nation will be a great loser if the morale, motivation and élan of our fine army are adversely affected by actions on extraneous grounds.

(The writer is a former Vice Chief of Army Staff)

(The views expressed here are personal to the writer)