The Fall and Fall of Indian Tennis

As one who has closely observed the Indian tennis scene during its halcyon days from the late 50s to the late 80s it pains me no end to see the depressing scenario these days when India is nowhere on the international stage and the players are making little headway around the ATP Tour circuit.

There was a time when Indian tennis basked in the international sunshine. Thanks to the exploits of Ramanathan Krishnan and the Amritraj brothers Anand and Vijay there was high respect for Indian tennis and the record spoke for itself. India entered the Davis Cup final in 1966, 1974 and 1987, Krishnan made it to the semifinals of the singles event at Wimbledon in 1960 and 1961 while Vijay and Ramesh Krishnan twice made it to the quarterfinals at both Wimbledon and US Open. In the pre-professional days Krishnan was ranked No 4 in the world while after the sport went pro Vijay and Ramesh had career high ATP rankings of 16 and 23 respectively.

Krishnan had Jaideep Mukherjea and Premjit Lal as his trusted partners in the 60s while Vijay and Anand had Sashi Menon and Jasjit Singh as able lieutenants in the 70s. Ramesh made his presence felt in the 80s and he was joined in the 90s by Leander Paes. Even in the 90s Ramesh and Paes saw to it that India at least stayed in the prestigious World Group including a famous upset win over France at Frejus in 1993 which saw India through to the semifinals.

Even after Ramesh retired Paes and Mahesh Bhupathi teamed up to keep the Indian flag aloft. While Paes notched up courageous victories in the singles he and Bhupathi emerged as a formidable doubles combination and India continued to just about stay in the World Group.

The problem started with Paes and Bhupathi started concentrating on doubles play in the new millennium and while this made them a feared combo around the circuit with both good enough to win Grand Slam titles either partnering each other or someone else it was not good enough to keep India in the World Group. There were hardly any singles players around and with four of five matches hinging on singles play India slipped out of the World Group and languished in the Asia/Oceania group for years.

Somdev Devvarman was India’s leading player in the first decade of the new millennium but he was not good enough to see that India maintained a sustained challenge to get back into the World Group on a regular basis. Moreover he did not make an impression in the Grand Slams going down in the second round at all four events. Worse was to follow after his retirement a few years ago for the cupboard has been bare. It is a tribute to the remarkable fitness of Paes who continued to play doubles till his mid 40s but obviously the impact was limited.

In the last few years India’s challenge in the Davis Cup has been little more than a whimper. The Indian presence around the ATP Tour has been most discouraging despite the fact that the present quartet of Ramkumar Ramanathan, Prajesh Gunneswaran, Yuki Bhambri and Sumit Nagal did show initial promise of better things.

The 28-year-old Yuki Bhambri for example in 2009 became the first Indian to win the junior singles event at the Australian Open only the fourth Indian after Ramanathan Krishnan, Ramesh Krishnan and Leander Paes to win a junior singles title at a Grand Slam. But in six entries at four Grand Slams from 2015 to 2018 he has lost in the first round. After achieving a highest ranking of 83 three years ago he has since slipped to 137.

Much the same may be said about Prajnesh now 31. At the subsidiary level he has not done badly winning two ATP Challenger and eight ITF singles titles. But when it comes to tournaments that really matter he has not progressed beyond the first round at each of the four Grand Slam events. A bronze medal in the men’s singles event at the 2018 Asian Games at Jakarta is poor consolation for one who promised so much and after achieving a career best ranking of 75 in 2019 he has now slipped to 130.

Ramkumar now 26 was another who gave the distinct impression of going far. His aggressive style of play saw him in 2018 reach his first ATP world tour final becoming the first Indian to reach a ATP world tour singles final since Somdev in 2011. A year earlier he had made headlines when in the Antalya Open he upset world No 8 and top seed Dominic Thiem in the second round. Then ranked 222 and playing his first match against a top ten player Ramkumar won 6-3, 6-2 and progressed till the quarterfinal where he went down to Marcus Baghdatis in a third set tie break. However he has a dismal record when it comes to Grand Slams being eliminated at the qualifying rounds of all four events and after reaching a career high ranking of 111 three years ago he has slid to 202.

The latest to join the Indian bandwagon is 23-year-old Sumit Nagal who first came into prominence in 2015 by winning the boys doubles title at Wimbledon. Coming through the qualifying rounds at the US Open in 2019 he caused a flutter by taking a set off Roger Federer in the first round and the all-time great had a few good things to say about the talented young Indian.

A year later he went one better by making the second round of the US Open becoming the first Indian since Somdev to win a match in the main draw before being defeated by the No 2 seed Dominic Thiem. However Sumit has been eliminated at the qualifying stage at both Wimbledon and the French Open and this year went down in the first round at the Australian Open. After achieving a career best ranking of 122 some six months ago Sumit is now at 136.

So it is easy to see why India is not making a splash at the Davis Cup and why Indian players are not making any impact around the ATP Tour circuit let alone Grand Slams. The way things are the record is unlikely to improve. 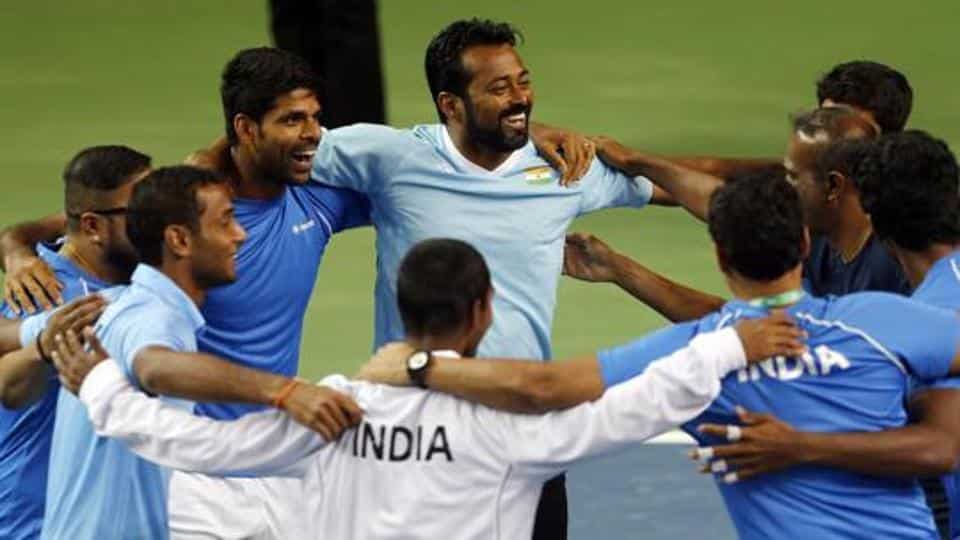